"Yes to Europe means no to debt pooling" 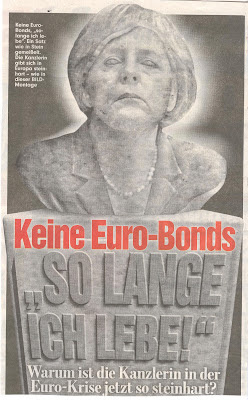 As so often in the crisis, German tabloid Bild has captured a hugely complex debate – on the possible pooling of present and future liabilities among eurozone members – with a snappy illustration, depicting Merkel’s ‘rock solid’ resistance to the idea after she said that “there will be no shared total debt liability for as long as I live”.

Merkel’s stance is warmly endorsed by former Handelsblatt editor Gabor Steingart who in a front page op-ed, under the headline “Nein! No! Non!”, compares Merkel to a lioness and argues that her firm denouncement of debt pooling was the “best moment” of her Chancellorship, adding that “this is the Merkel that one wishes to see more often”. He adds that:

“Now she has to explain to our friends at the summit that that it helps no one if Germany passes the fruits of its labour around liberally. It is actually the other way around: ‘Yes’ to Europe means ‘No’ to Barroso’s ideas. The replacement of the main components of the market economy – work and effort – with consumption and credit has led us to where we are today… Europe needs to roll up its sleeves and not a parasitic philosophy, where everyone aspires to the wealth of their neighbours.”

However, for its part Bild does also cheekily notes other ‘famous last words’, such as DDR leader Erich Honecker’s assertion that the Berlin Wall would stand for 100 years or former Libyan leader Muammar Gaddafi’s claim that his people loved him.

But still, a good illustration of how far away Germany still is from nodding through grand schemes for debt pooling.