And They’re Off…For the 19th time 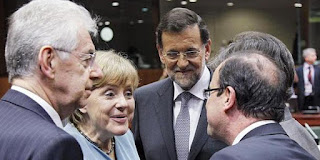 The EU summit has officially kicked off in Brussels, and talks are expected to drag on until late night. So far, little seems to be moving, and live blogs covering the summit are languishing a bit. However, courtesy of EurActiv France, we have got hold of the updated version of the draft conclusions of the meeting. The following new bits have caught our attention:

1) The conclusions now mention the €120bn ‘growth package’ discussed by Angela Merkel, François Hollande, Mario Monti and Mariano Rajoy in Rome last week. The total amount would be given by:

However, as we have already discussed here, here and here, none of these investments represents a significant boost in solving the crisis.

2)  The updated conclusions take account of Herman Van Rompuy’s proposals for a banking union (in case you missed our reaction to the proposals, click here). The conclusions state that any upcoming legislation designed to set up a banking union “should allow for specific differentiations between euro and non-euro area member states in areas that are preponderantly linked to the functioning of the monetary union and the stability of the euro area rather than to the single market.”

According to the new draft, “Existing legislative proposals on bank resolution and deposit guarantees should be adopted before the end of the year. Building on these, the Commission will submit before the end of 2012 further legislative proposals on a single European banking supervision system covering all banks, a European deposit guarantee scheme and a European bank resolution scheme.”

This is in line with the European Commission’s objective of having the banking union up and running from 2013, which, as we noted before (see here), looks overly-optimistic.

No mention is made of short-term measures to keep borrowing costs down – which France, Italy and Spain are particularly keen on. Should these be turned into the final conclusions of the summit, markets will likely be disappointed and the ball will once again be back in the ECB’s court – which, by the way, seems to already be laying the ground for a new interest rate cut, although we doubt that will suffice either.