The eurozone crisis in 140 characters 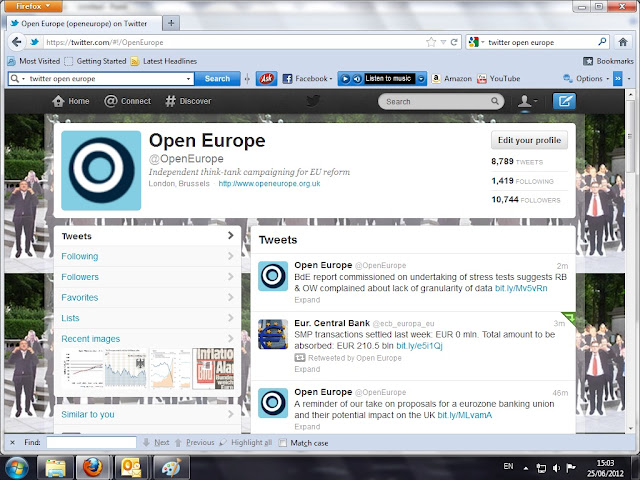 The eurozone crisis – with its numerous rolling summits, announcements, proposals, simultaneous economic and political developments in multiple member states and fast-paced market reactions – has brought Twitter to the forefront of EU reporting and analysis.

Unlike English football commentator Mark Lawrenson, at Open Europe (as in @openeurope) we like twitter and use it to keep up with various euro developments, as well as to flag up key events and our own analysis. It’s a great supplement to our increasingly popular daily press summary. Of course, the key is not only to tweet fast – and summarise often complex economic and political concepts in 140 characters – but to also get it right. Which is why we were very pleased to see that Barron’s – a leading American financial magazine – has selected Open Europe’s twitter account as one of five that “consistently provide great information and trenchant analysis” on the Eurozone crisis.

“Once again, Twitter is proving its mettle as a source of instant news and analysis—this time on the euro crisis. Just as it did last year during the Arab Spring and the meltdown at Japan’s nuclear plants, the social network is producing a constant stream of real-time information on the big news story of the day—some of it spot-on, some not. The trick is to follow the right people, or tweeps, and Barron’s is here to help with that.”

The magazine notes that Open Europe’s strength is its “Deep bench of analysts tracking political developments”, describing us as

“a think tank based in the UK that deploys a small army of research analysts fluent in more than a dozen languages to keep tabs on the crisis, both reporting and commenting on the news. A recent typical tweet dismissed any reasons for optimism for Spain after its 10-year bond yield fell below the critical 7% level. If investors were buying on rumours that the European bailout fund would buy the troubled bonds, forget it. Yes, all that in one tweet.”

Many thanks for that. Please forgive us the shameless self-promotion but if you don’t already, do follow us on twitter @openeurope.