Let’s dare to have less Europe! 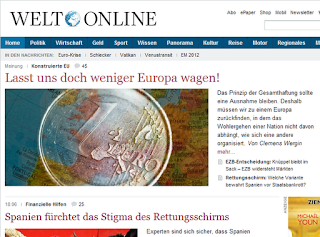 As leading UK politicians and commentators urge eurozone countries, above all Germany to take the plunge into a fully fledges fiscal and economic union (while firmly rejecting the UK’s participation), it seems they have failed to contend with quite how deep resistance to such a move might be. Indeed we are beginning to witness a bizarre spectacle in which the UK is arguing for more EU intervention while many on the continent are arguing for less, a complete turn-around from recent history.

For example, at the time of going to pixel, the homepage of Die Welt leads with a comment piece by Clemens Wergin entitled “Lets dare to have less Europe”. In the piece, he makes the sorts of arguments often made by the more nuanced EU-critical UK-based commentators, such as:

“The principle of collective responsibility should remain an exception. Therefore, we must return to a Europe in which the welfare of one nation does not depend on how others organise themselves.”

“[The moves towards a fiscal and banking union] mean even larger intervention rights for the European institutions in national budgets. At the same time it would also mean that the inability of Italian and Greek officials to persuade their wealthy citizens to pay their taxes would be compensated by fees from the dutiful North. It would be the perfect recipe for Europe-wide organized irresponsibility.”

“This type of deepening is not wanted by the citizens, it will not work and it drives a wedge of division into the continent. It is also further evidence of the implacability with which the political elites of the continent run in the same direction. When it comes to European issues, there is a form of ‘group-think’ that is far too rarely questioned. According to this creed, only he or she who calls for more integration can be considered to be a good European. Meanwhile, it has long been the opposite.”

Surely these are the sort of sentiments that constructive UK EU-reformers ought to be embracing?