The EU’s Big Five (& Austria): where are they at ahead of tonight’s summit? 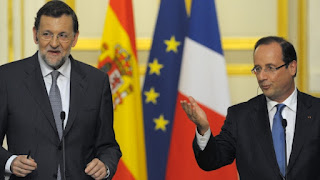 The ‘growth dinner’ of EU leaders is about to start. No big decisions are expected (this is a meeting of EU leaders after all) but here’s an overview of where the different big countries are at:

“Eurobonds are a matter of timing. I advice all participants not to position themselves inherently against them.”

Similarly, Rainer Brüderle, the parliamentary leader of the FDP (Merkel’s junior coalition partner) told German radio Deutschlandfunk that if structural reforms and budgetary discipline were implemented, Germany should not rule out the introduction of Eurobonds “at a later stage”.

It won’t touch Merkel for now, but an indication that Germany is set for a long, grinding and existential (in the euro sense of the word at least) debate on this issue.

It looks like Austrian Chancellor Werner Faymann is on a different wavelength to his Finance Minister Maria Fekter. The latter is opposed to the idea of debt-financed growth à la Hollande, while Faymann told Kleine Zeitung in an interview that he “fully supports” Hollande in wanting to discuss Eurobonds at tonight’s meeting. However, the Austrian Chancellor made clear that Eurobonds are “a long-term project that cannot be realised in the next two or three years” while stressing the need to also have strong mechanisms to ensure that budget discipline is “an absolute prerequisite” for the proposal to be implemented.

We can’t help noting how Hollande of late stropped referring to the fiscal treaty as frequently, instead stressing the ‘growth pact’ for the eurozone.

In his joint press conference with Hollande, Rajoy simply reaffirmed Spain’s priorities for tonight’s meeting (and the near future), saying that “financing” of states and banks was “the most urgent” of all the issues:

Staying true to his style, Italian Prime Minister Mario Monti has kept awfully quiet, although he has warned that trying to isolate Merkel tonight would be “impractical and counterproductive” (no kidding). Monti and his cabinet are presumably doing a lot of work behind the scenes, based on a couple of specific proposals (which we mentioned here and here).

The Italian government yesterday adopted plans to unblock between €20bn and €30bn by the end of the year to make overdue payments to private firms that have supplied goods or services to the public administrations. Could this be a sign that Monti’s proposal to temporarily exempt overdue payments to businesses from the EU’s deficit and debt rules is gaining ground in Berlin? Possibly…

The UK will continue to voice its opposition to a financial transactions tax (the Commission STILL has not given up on this proposal and will apparently present a massaged impact assessment tonight showing that the negative effect on EU GDP is not bad at all, never mind what it said initially). Cameron will also, rightly, push for various pro single market measures. It will be interesting to see how the UK responds to ideas for ‘project bonds’ and topping up the European Investment Bank. Cameron will also urge “decisive action” over Greece/the euro and may also provide some (largely irrelevant) advice on how the Greeks should vote in the forthcoming elections and the Germans should respond to proposals for Eurobonds.

In any case, as always, EU leaders will have a lot to talk about.