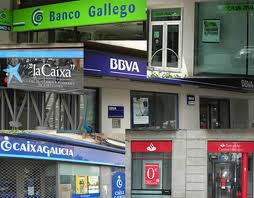 The Spanish government held a press conference this afternoon finally laying out its plans for dealing with its significantly troubled banking sector. As usual Spanish Prime Minister Mariano Rajoy dodged the limelight and left the unenviable task of presenting the proposals to his Deputy, Soraya Sáenz de Santamaría, and Finance Minister Luis de Guindos – despite this being par for the course with the new government we still can’t help but feel that it fails to inspire confidence.

That fact aside, the plan did include a few concrete details on how Spain plans to deal with the Spanish banking sector, below we outline the key points and give our take:
·         Two independent auditors will carry out an evaluation of all the real estate assets held by Spanish banks – the Deputy PM termed this “an exercise in transparency”.
Open Europe take: We have been calling for this for some time, so believe it is a positive step. However, we have seen that similar tests have been fudged in the eurozone and Spain before, so it is very much wait and see. Taking an adverse scenario and ensuring these assets are written down to their real values is key – if they start posting falls in the future it will reignite the uncertainty surrounding the banking sector. The Spanish government also failed to mention that, at least according to the Spanish press, de Guindos was going to be asked to hire independent auditors by his eurozone counterparts at the meeting of eurozone finance ministers next week.
·         By the end of 2012, provisions to cover against losses on real estate loans considered as ‘non problematic’ will have to increase from 7% to 30%.
Open Europe take: This seems far too low. Given comparisons to Ireland we expect real estate prices could fall by another 35% in Spain. Additionally, this move seems to be skipping a step – Spanish banks already have €136bn in ‘doubtful’ loans against only €54bn in provisions, surely provisions against these very risky assets should be increased first or at least in tandem.
·         In absolute terms, this means an increase of around €30bn.
Open Europe take: Again, far too little. We predict that Spanish banks would need to at least double their provisions, taking them up to around €100bn. Similar estimates abound, with RBS calling for an additional €100bn and Roubini Global Economics suggesting it could go as high as €250bn over the next few years. Meeting the Basel III capital requirements will put further strain on the sector.
·         Banks will be allowed to get money from the FROB, but will have to pay 10% interest on it – Spanish Economy Minister Luis de Guindos stressed that this money cannot therefore be seen as state aid. Suggested maximum use of public funds would be €15bn. Heavy use of ‘contingent convertible capital’.
Open Europe take: This seems to be poorly thought out and based on an ideological reaction. Clearly the government is keen to avoid being seen to bail out banks, and rightly so. However, the banks tapping these funds will be those locked out of the interbank funding market (due to high rates), punishing them with 10% interest will make this recourse worthless. Any use of public funds should come with strong conditions but better to focus on letting some banks fail and be wound down in an orderly fashion, while forcing those that take funds to produce ‘living wills’ and give the state equity warrants. Contingent convertible capital can be useful but does not fundamentally solve the problems facing the banks, again it simply delays dealing with the problems and kicks in as a last resort safety mechanism – will do little if provisions are shown to be woefully small or valuations far too high.
·         Spanish banks will be obliged to transfer real estate assets into ad hoc societies tasked to sell them on the markets – i.e. the ‘bad bank’ that dare not speak its name.
Open Europe take: Potentially a large burden for the state, but given the breadth and depth of the problems across the sector some form of ‘bad bank’ scheme looked hard to avoid. The key here will be transferring the assets at realistic values so that they are sellable or can be written off. The Irish experience with NAMA makes this point clear – a bad bank stuck with uncertain assets can be a huge burden to the state. Furthermore, it could also distort the recovery of the sector as a whole, if the overvalued assets pile up on state books it will be hard for the remaining market to adjust – something which is necessary if the Spanish economy is to rebalance and recover.
The market response to the proposals has been lukewarm at best with Spanish borrowing costs rising slightly and the shares of many Spanish banks falling sharply.
There are some positive steps in the proposals and we will reserve full judgement until the complete package is announced and the stress tests have been detailed, however, it again seems to be a step short of what is needed. The key to tackling these banking sector problems is doing so decisively and in one swoop, rather than pushing the problems to tomorrow. Incremental adjustments increase uncertainty and expose the state to a longer and more volatile burden than needed – given the size of the Spanish economy, that is something which the eurozone cannot afford now or in the future.