Well, it didn’t take long. You may have thought that yesterday’s comments from people allegedly close to Bundesbank President Jens Weidmann to the effect that Germany could live with the shocking inflation rate of 2-3% were in any way a sign that Germany was about to cave in on its resistance to anything that resembles high inflation. Well the front page of Bild Zeitung – the gold standard of European tabloids (pun intended) – says it all: 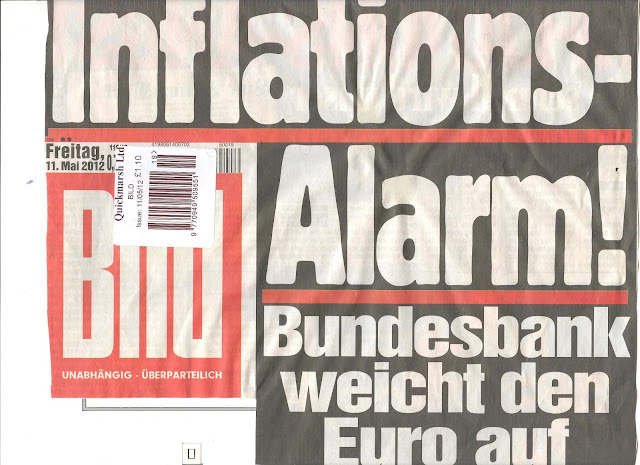 The “Bundesbank is going soft on the euro”, adding that:

“Over the next few years prices in Germany will rise much faster than before. Our venerable Bundesbank, the sacred guardian of price stability, will do nothing about this since it considers it to be ‘manageable’”.

And in case the 13 million or so Bild readers didn’t get the message, page 2 features a giant picture of a one trillion DM banknote from the Weimar era:

An op-ed by the paper’s chief editor Nikolas Blome argues that:

“[inflation] will above all hit workers, employees and pensioners. Precisely those who kept a cool head and ploughed on through the crisis. This is unfair. It gnaws at our trust in money and our major institutions, in politics and central banks… since Germans have bitterly experienced it themselves they know that high inflation ultimately breaks down every society”.

It wasn’t only Bild though. The man himself, Weidmann, moved swiftly to deny the reports, claiming in an interview with Süddeutsche that this was an “absurd discussion”. He clarified that keeping inflation below 2% in the eurozone as a whole meant that “in some cases” German inflation would be higher, but that “we will ensure [in the ECB’s governing council] that inflation in Germany will not run out of control. Citizens can rely on the vigilance of the Bundesbank”.

This is one national core belief you don’t mess with.