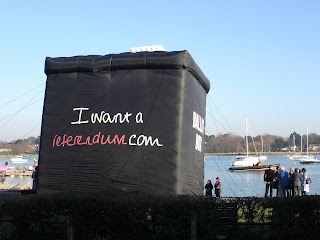 With Europe as fluid as ever, talk of some sort of EU referendum is heating up in the UK (well at least in the Westminster bubble).

The always excellent James Forsyth of the Spectator argued in the magazine yesterday that London Mayor Boris Johnson’s support for a referendum and UKIP’s rise taken together “make it highly likely that Britain will have its first vote on Europe since 1975 within the next five years.”

He also notes that,

“The popularity of Cameron’s EU veto made his circle realise how much of a political asset Euroscepticism could be, if used in the right way. There is also concern in No. 10 that if the Tories don’t offer the public a vote, Labour will.”

He goes on to say that,

“One source intimately involved in Tory electoral strategy told me recently that a referendum in the next manifesto was ‘basically a certainty’…My understanding is that, at the moment, the favoured option is to propose renegotiation, followed by a referendum on the new arrangements within 18 months. During the campaign, the Tories would argue for staying in if new terms could be agreed but leaving if the rest of Europe refused to play ball.”

The equally excellent Paul Goodman over on Conservative Home today echoes Forsyth, listing a range of reasons why a referendum draws nearer.

And Forsyth’s colleague Alex Massie also picks up on this on the Speccie’s Coffee House blog, looking at all the complications involved in trying to square an EU renegotiation with a referendum (the “on what?” question always looms large). We’ve looked at the various options for a referendum in detail before, so this is all familiar (if you’re interested in the different options, we strongly recommend reading this piece).  Massie makes a good point though. An EU referendum is too often seen in Tory leadership ranks as being about “a matter of party morale, discipline and tactical positioning”, not getting something that actually works for the UK.

We agree. The thing is, this is far too complicated an issue to make a matter of mere party management. It will be part of the equation, of course, but making it subject to pure party politics will reduce the discussion to the usual Westminster back-and-forth on vague concepts such as “influence”, “isolation” or “sovereignty” – it will be Mandelson land.

But where Massie – and a whole range of other commentators and politicians – get it wrong is when they say that in contrast to the renegotiation option, “an in/out plebiscite at least offers a choice between easily-grasped options.”

No it doesn’t. Staying in raises a whole range of complicated questions – what does the UK do if the eurozone takes that quantum leap towards further integration? What happens if the EU merely becomes a political extension of the eurozone (which Britain can’t join)? In other words, if we want things to stay as they are, things will have to change.

And the “out” option? It sounds easy at a superficial glance, but in a serious discussion, it would raise far more questions than answers. In fact, there’s virtually no “out” option (save perhaps one) – all options to withdraw from the EU treaties (which is what ‘out’ must mean, though it is rarely defined), involves joining something else. Doing a “Norway” would be suicide for UK, i.e. accepting 2/3 of EU laws but with no say over them; a Switzerland would be slightly better but still immensely complicated. A different type of Free Trade Agreement altogether involving business paying hefty fees or facing new admin burdens on exports to the EU, which contain some imported components? A customs union a la Turkey meaning being stuffed on market access on services? Simply falling back on the WTO’s Most Favoured Nation (MFN) rules, with a range of costly barriers to trade and movement?

Answers anyone? The truth is that most of the complications that apply to renegotiation, also apply to the “out” option, including the need for some sort of “approval” from other countries for whatever alternative arrangement the UK enters into (apart from the WTO option) possibly. The truth is that all three options: staying in on current terms, renegotiation or withdrawal from the EU treaties are massively complicated. To whet your appetite, we’re about to publish a comprehensive report looking at the different options for the UK was it to vote to decide to leave. And trust us, it’s complicated.

What we do know is that both Britain and the eurozone will simply have to move. It’s therefore right that No 10 is now considering different options.

But again, it should be for the right reasons.