Is the Bundesbank going soft? 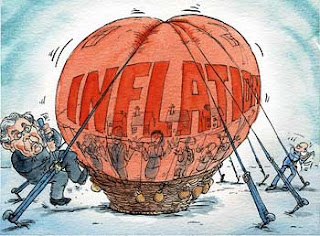 Shock horror. According to Reuters Deutschland, an unnamed central banker close to Bundesbank President Jens Weidmann today said the following, in response to the wide rumours that the Bundesbank may be willing to accept higher inflation to help solve the eurozone crisis:

“By this it is meant [that with] a rate of inflation that is moderately above the target of the ECB which is just under 2 per cent…No one need be afraid of massive currency devaluation”.

Apparently, the belief is that the Bundesbank ‘can live with’ 2.5% or 2.6% inflation.

This follows an interview with German Finance Minister Wolfgang Schäuble,  published by Focus over the weekend, in which he said thus:

“It is fine if German wages are currently increasing more sharply than in all other EU countries”.

After many years of reforms, he said, Germany has done its homework and can afford higher collective wage settlements than other countries.

So is this a sign that Germany is starting to follow the advice of a whole host of Anglo-Saxon commentators who see higher inflation in Germany as vital if the euro is to survive?

We wouldn’t bet on it. When commentators talk about higher inflation, they have something much higher than 2.5% in mind (though some commentators may not realise that themselves) – this certainly doesn’t seem high enough to encourage the re-balancing and evening-out of competitiveness which many believe the eurozone needs to survive in the long term. The media may be getting ahead of itself on this one.