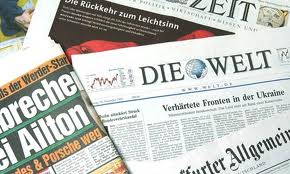 Following Sunday’s elections in which French and Greek voters were able to have their say on their governments’ handling of the eurozone crisis, which as we’ve covered in our daily press summary, was unequivocally negative. Given the position that Germany will adopt will be the single most important factor in determining the future of the eurozone, we thought it would be worth taking a closer look at the reaction in the German press to the weekend’s results.

Starting off with Bild, Germany (and Europe’s most widely-read paper), the paper’s Greece correspondent Paul Ronzheimer argues that:

“In a democracy, each voter has the right to decide freely. And no one wants to deny the Greeks this right. But a free choice can have consequences… About two-thirds of Greeks want to stay in the eurozone. But at the same time, they chose to vote for radical parties that reject all that is required for this membership: savings and reforms. Germany and the EU desperately need a Plan B: How can the eurozone best continue on without Greece?”

Moving onto FAZ, we have economics editor Holger Steltzner, a well established austerity hawk arguing in a piece entitled “Merkel fights alone” that:

“How do you deal with a country that firstly swindled access to the euro, then plunged the EU into an existential crisis, and then cast two-thirds of votes for radical parties that deny austerity?”

On Hollande, Steltzner is slightly more restrained, if still pessimistic:

“Merkel takes the debt brake seriously, Hollande does not want to submit to any rule to curb the deficit. When Merkel speaks of growth, she means structural reforms to loosen restraints on the labour or manufacturing markets. About the beneficial effects of competition (the fruits of which the German economy is currently reaping) Hollande speaks barely a word.”

This gloomy take is also shared by the Die Welt’s foreign affairs editor Clemens Wergin who argues the election results are triumph of denial over reality, and the embodiment of “old Europe”:

“Greek and French voters have rebelled against what they perceive as German savings and reform diktats. This is however unfair when measured against the significant risks and liabilities which Germany has taken on in order to save the EU’s problem countries from bankruptcy. Likewise Germany’s fiscal capacity is significantly overestimated by those who think that Berlin should commit even more money towards Europe-wide stimulus programmes.”

“While Italian PM Mario Monti is trying to implement real reforms and in the longer term adopt German-style austerity politics, it seems Hollande does not realise the enormous need for reforms that the eurozone’s problem countries are procrastinating over… Europe could cope with an irresponsible Greece committing suicide in the eurozone. Some would even welcome it. However a France that loses the confidence of financial markets would be the worst case scenario for the euro – and for Europe.”

However others strike a slightly more optimistic tone, with Die Zeit’s Gerd Appenzeller arguing that:

“In Greece, as in France, the desire is now for more growth in lieu of cuts, regardless of where the credit comes from… Francois Hollande will, nevertheless, be committed to European integration and Franco-German strength, like all other French presidents before him. In spite of this, he is not likely to make concessions with the fiscal compact and austerity plans. Indeed, Greece poses even more of a problem with its intentions to discontinue further cuts which would mean that it could be imminently bankrupt. This would ultimately endanger Greece more than the rest of Europe.”

“If the second largest EU state were to veer from the path of savings and reform, then the monetary union would come into its heaviest existential crisis yet. However, it does not appear that Hollande would so lightly put the euro, the most important legacy of his political mentor François Mitterrand, at risk.”

All in all then the Germans are not hitting the panic button just yet, although arguably many are clearly worried that Merkel risks becoming politically “isolated”, a concept we think is far too simplistic in the context of European politics (see here and here for examples). However, it is certain that following the French and Greek results, the road ahead for the eurozone rescue is looking more bumpy than only a few days ago.