The beginning of the end game in Greece? 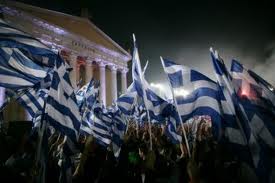 This weekend’s election was expected to be relatively predictable with the largest parties forming a coalition and eventually adhering to the latest EU/IMF bailout package. Most eyes were on the French Presidential election and its impact on the Franco-German axis. Unfortunately, as we predicted, there were still a few surprises in store in Greece. Here’s the (almost) final result:

The biggest surprise is clearly the huge rise in SYRIZA’s share of the vote and the drastic fall in Pasok’s share.
In our post in the run up to the elections we laid out three scenarios: a stable ND-Pasok coalition, an unstable coalition leading to new elections where ND win a majority and an unstable coalition which falls leading to a cycle of elections where no-one can win a clear mandate. Those three scenarios clearly still hold, but the probabilities have definitely changed. Previously, the likelihood ran in order, however, now the second and third scenarios are looking increasingly probable.
ND and Pasok only hold 149 seats, short of the 151 majority they need. The Democratic Left has ruled out joining a three-way coalition. This makes new elections (probably in June) essentially inevitable as there is no stable coalition to be formed.
However, given the showing in the elections it is hard to imagine ND, or any party, gaining a clear majority. Given the strength of the anti-austerity feeling in Greece it is unlikely that these results would be a one-off. The anti-austerity parties only look likely to gain ground in subsequent elections, making a stable coalition less likely. This analysis suggests that a cycle of elections looks increasingly probable in Greece.
What does all this mean for the eurozone?
More uncertainty, that’s for sure. Germany and the EU have already both come out to reiterate the need for Greece to maintain its commitment to the latest bailout packages, stress that keeping Greece in the euro requires strong participation from both sides (rather ominous if you ask us).
Unfortunately, this looks unlikely, even if by some miracle ND and Pasok manage to form a workable coalition at some point. ND leader Antonis Samaras has already come out saying that he will “modify the memorandum [of understanding]” with Greece’s creditors to focus on growth. This can probably be seen as the start of his next election campaign but will still send shivers down the spines of German politicians.
A renegotiation of some form looks on the cards and will not be well received. Samaras would still be the EU’s preference given his history of strong rhetoric but then still signing up to the bailout programme. The alternatives are not appealing from eurozone leaders’ perspective: either there is a cycle of elections leaving no government in place to implement the reforms or the anti-austerity feeling grows so strong that a SYRIZA led government of some form comes to power, signalling the end of the bailout programme for good.
There is a confluence of factors here which increases the prospect of a Greek exit from the eurozone. The broader feeling in Greece although still in favour of the euro is shifting strongly against austerity – how this tension will play out is unclear but the usual fall-back of broad public support for the eurozone looks shakier than it has ever been.
Since the last round of poisonous bailout negotiations the eurozone and financial markets have been preparing for a Greek exit, if not publicly than definitely behind the scenes. The stance against any renegotiation and flexibility on reforms has hardened from eurozone leaders. Furthermore, Greece is approaching a primary surplus, the point where an exit and a full default look slightly more attractive as the country could (at least in theory) survive without access to financial markets or direct support.
Greece’s future will not be decided in the next few days but the coming weeks and months could well settle its place in the eurozone once and for all. This election may not provide many answers, as we expected, but it could mark the beginning of the end game in Greece.