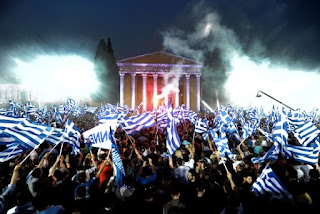 The Greek elections are almost upon us. Much of the attention (including ours) has been focused on the French election, possibly rightly given the potential impact on the Franco-German axis and the austerity approach to the eurozone crisis. The lack of attention may be down to Greece-fatigue following the intense start to the year with the Greek restructuring, or the fact that with a bailout and strict programme in place the room for flexibility with the new government is severely limited. That said, the Greek elections have the potential to be almost as important.

Despite the well documented rise of fringe parties and the strong talk from New Democracy (ND), a coalition between Pasok and ND looks to be the most likely outcome. Combined the parties may gain around 35% – 40% of the vote. The largest party (likely to be ND) gets an extra 50 seats under Greek electoral rules, meaning that the coalition would be the largest combined group in the Parliament and may just scrape a majority. This position will be aided by the fact that all the other parties are fairly disparate and unlikely to form any cohesive opposition.
However, even if this coalition is formed there numerous ways in which it could play out:
1)      Stable coalition – ND and Pasok manage to gain and hold a majority in the Parliament. They set about attempting to implement the EU/IMF bailout package. May be some talk of renegotiating elements of the package, particularly to boost growth. If anyone is to have success on this front it would be this coalition as it has at least some experience and knowledge of negotiating with EU/IMF.
Impact on the eurozone: This added stability would likely be positive for markets and the eurozone in the short term. Ultimately, it will not make much difference since Greek debt still looks unsustainable and implementing the necessary reforms will be a massive challenge on the ground even if they are pushed through parliament. There is less chance of external financing being cut off anytime soon, since the government will at least try to adhere to the programme.
2)      Coalition breaks up, new elections where ND wins a majority – The coalition fails to gain a full majority in Parliament (possibly due to Pasok defections after the deal is struck) or fails after a very short time due to lack of cohesion between parties (especially if ND leader Antonis Samaras feels he could gain a full majority in new elections). Elections delay implementation of EU/IMF package but once ND government comes into power the implementation continues, although calls for growth policies will grow louder.
Impact on the eurozone: Ultimately, depends on how long the coalition lasts and the policies which ND uses in the new election to gain a majority (potentially shift further right if there is growing disillusionment with the EU/IMF austerity).  ND unlikely to push for euro exit or full renegotiation of EU/IMF package so that adds certainty, but the inherent problems with the package (mentioned above and covered in detail here) still hold true. The turnover between elections could be important. Any delay in implementing the package will not go down well with the EU or IMF and could reduce its effectiveness even further.
3)      Coalition breaks up, new elections fail to deliver suitable replacement leading to an election cycle – Coalition breaks down as mentioned above, but this time the new elections fail to deliver a clear winner, possibly with an even greater move towards the far left and far right parties. This would likely trigger a series of unstable coalitions and probably more elections. Once this cycle has begun it will be hard to break, particularly with Greece’s economic situation seemingly only getting worse.
Impact on the eurozone: This would be the worst of all outcomes. The EU/IMF package would fall by the wayside due to lack of willingness or a government to implement it. If a cycle of elections does take hold it could feed anti-euro sentiment, although anger has, for now, been largely directed at the austerity bailout rather than euro membership more generally. This would eventually result in funding being cut off and Greece probably having to exit the eurozone. This is unless such a threat galvanises the population to vote a single party supporting the euro into power.

Overall, a ND-Pasok coalition looks likely but it will probably be far from stable. It is definitely hard to see it serving a full term. The most likely outcomes (1 and 2 above) may deliver some short term certainty but problems loom large for Greece over the medium to long term. The EU/IMF package still looks unachievable for Greece and will not solve its debt sustainability problems, while there is surely a tipping point where the Greek population withdraws its support for the euro more. At the moment this is still some way off. These elections will certainly not deliver a definitive answer to long term issues in Greece and there is still a chance that an uncertain outcome could worsen Greece’s situation.