Europe awaits the next French President

Sunday will be a big day in EU politics: both the Greeks and the French go to the polls.

Ahead of the French elections, we’ve published a briefing looking at the possible impact of the election results on Europe. In particular, we note that,

“No matter who wins, France could well become a more difficult and assertive EU partner, though both candidates are likely to struggle to deliver on their various promises to take on Europe, such as re-negotiating the fiscal treaty and tougher border controls. The Franco-German axis will continue, but a Hollande victory in particular will mean a more unpredictable relationship and therefore potentially more uncertainty on the markets. Clearly, under Hollande, Germany will find it far more difficult to push its vision of a eurozone based on strong budget discipline.”

Do check out the full briefing here, and a brief summary here.

Apart from the obvious impact on the Franco-German axis, another thing is worth flagging up. Have a look at the graph below. 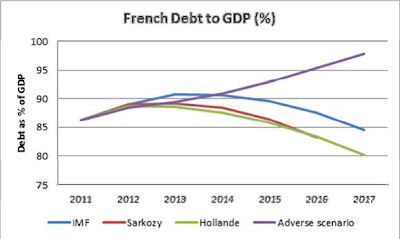 The graph illustrates that, beyond the rhetoric, the budget plans of the two candidates do not differ radically with respect to the impact on France’s debt reduction and budget outlook. The graph looks at how much the two candidates’ plans are meant to reduce French debt by – compared to the IMF projections and an adverse scenario estimated by Open Europe. Virtually, the only difference between the two is Hollande’s decision to delay a balanced budget by one year, and his more optimistic growth assumptions. It is not clear why Hollande’s growth expectations are more optimistic, given that the only difference is a slight delay in austerity – something which in turn casts serious doubt as to whether Hollande can actually deliver what he has promised. The IMF predictions highlight that both plans may be slightly optimistic but not impossible. Despite concerns over Hollande’s economic policy and its impact on the euro, if he manages to achieve roughly the debt reduction he sets out in his plan, it would clearly be a positive thing for both France and the euro.

However, as the adverse scenario highlights, any slippages (particularly with regard to the primary surplus) could bring France’s debt sustainability into question and also lead French borrowing cost to increase markedly. This would in turn shake confidence in the entire eurozone – not least since any French downgrade will also effectively reduce the lending capacity of the eurozone’s bailout funds (the EFSF and the ESM). Such slippages could be caused and/or exacerbated by any another crisis in Spain, to which France would be heavily exposed…