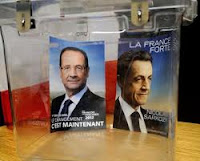 The first round of the French presidential elections took place yesterday. As expected, the contest for the keys to the Elysée will  be between Socialist candidate François Hollande and Nicolas Sarkozy in the final run-off on 6 May (when, incidentally, the Greek elections are also taking place).

The key question now is what decision the almost 45% of French voters who didn’t vote for Hollande or Sarkozy yesterday will make in two weeks’ time. We will look at the significance of the result for the future of France, the eurozone and the EU as a whole in a separate post. For the moment, allow us to deploy our various language skills to round up how the media across Europe have responded to the results of the first round.

For all manner of reasons, particularly the future handling of the eurozone crisis, the reaction from Germany is particularly interesting. A leader in FAZ argues,

“[France] reveals a scary political landscape…A third of voters have voted for candidates with a completely alien view of the world, but who have in common one thing: explicitly nationalist, anti-European beliefs.”

“The core concern should be that none of the candidates have discussed the hard reforms the country is facing…If France slides further into the direction of the abyss, the future of the euro will also be in danger – with or without Le Pen.”

An opinion piece in Deutsche Mittelstands Nachrichten sees yesterday’s results as a “painful defeat” for Merkel’s vision of Europe, going on to note,

“The brutal rejection of the euro by the French, with 20% of the vote for [far-right leader Marine] Le Pen, can be described as an earthquake, whose tremors will above all else be felt in Brussels.”

A similar line is taken by Marco Zatterin – Brussels correspondent for Italian daily La Stampa. On his blog, he argues that Hollande is not, and should not, be seen as a threat in Brussels, but stresses,

“The pitfall is elsewhere. It’s in the 20% of Le Pen-ists confirming that one in five voters in Europe are tempted by euroscepticism. This is a reality that the EU must stop underestimating.”

In Greek daily To Vima, columnist Giorgos Malouhos notes, perhaps hopefully, that Sarkozy began to lose popular support since he chose to “faithfully” support Germany’s austerity-focused vision of the future of the eurozone, and argues,

“Sarkozy’s defeat is not just his own: It’s also the defeat of German policy.”

Spanish business daily Expansión is already looking at the final showdown. It argues,

“The victory of one or another candidate would also change the scenario in Spain. Hollande’s victory – and a Europe with ‘Merkhollande’ – would allow Spain to take it easier on its deficit reduction targets. On the contrary, five more years with Nicolas Sarkozy at the Elysée – and ‘Merkozy’ in Europe – would mean further tightening the rope around Spain’s neck.”

“Hollande’s victory doesn’t promise much good, neither for France nor for the euro…If Hollande pushes through his policy intentions, there will be guaranteed panic.”

But what about the French papers?

“Almost two-thirds of the electorate have voted for some form of economic realism, either on the right or on the left. The French are now offered these and no other options. The first one, championed by Nicolas Sarkozy, advocates a tested policy of quick deficit reduction via public spending cuts and support for competitiveness. The second one, embodied by François Hollande, contents itself with a slower path, which privileges taxes, especially on enterprises, and safeguards our old habituation to the welfare state. One [option] has yet to convince the French, the other one has yet to convince the markets.”

In La Tribune, François Roche sees Sarkozy moving further to the right on the road to the second round, as he argues,

“By dint of ploughing Front National’s land, Nicolas Sarkozy has made Marine Le Pen the big winner of the first round of the presidential election. He is now in a trap: if he wants to win the election, the only thing he can do is to try and attract people who voted for Front National in the first round…His only chance is to present himself as the champion of Front National’s own values.”

While the Le Pen phenomenon has understandably gained a large share of the column inches across Europe, it is perhaps some of the German media’s reaction to the results that is the most revealing and significant in terms of the future. A Merkozy divorce would undoubtedly make things interesting and the fact that such a large share of the French electorate is clearly dissatisfied with the major parties has certainly caught the eye in Berlin – where many could begin to fear that France may not have the stomach to stay the course with Merkel’s eurozone rescue strategy.