He started strong but ran out of steam… 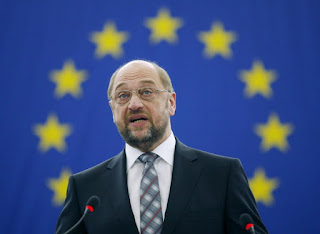 As you’re aware, “the EU” has a range of different Presidents – a frequent source of confusion for both citizens in Europe and partners from abroad. Socialist MEP Martin Schulz is one of them, being the President of the European Parliament. While Schultz has somewhat of a marmite personality, he does have some interesting to say – unlike many of his predecessors. Yesterday’s interview with FAZ is a good example.

He starts off strongly:

“People do not agree with the EU in its present form… people feel that the idea has become a bureaucracy and they reject it…As a young man I’ve always fought for the United States of Europe. Today I know that this is not possible. We will not turn Germany and France into California and Florida.”

He continues even stronger:

“The EU must focus on the essentials and the leave the labelling of Hessian apple wine to the Hessians.”

He also proposes a move towards a free trade area in the Mediterranean – which we also have argued for:

“In the 21st century the population of North Africa will exceed 300 million people who need infrastructure, education, hospitals and sustainable agriculture…Why do not we create an economic area in the Mediterranean? Instead, we’d rather bicker about what fertilizer for farmers to deploy.”

But from there he starts to go downhill, and fast and steep at that:

“The euro is one of the greatest icons [of an integrated Europe] which expresses the economic strength of the still richest continent through a common currency… .”

Continuing downhill he argues that thr EU budget ought to be spared the kind of austerity that member states are having to implement, saying:

“when it comes to growth, the [structural and cohesion funds] are the most successful project of the EU. There are certainly some highways built incorrectly, but the cohesion policy has recently led to enormous economic growth in Eastern Europe and before that in the South.”

It seems that Schulz must have mislaid his copy of our recent report on the effectiveness (or lack thereof) of the structural funds. He’s right that the funds should be focussed on the EU’s new memebr states, but totally wrong that the funds have categorically have had a positive impact in Europe’s south – there’s no conclusive evidence for that.

Schulz also includes a tongue in cheek defence of Chancellor Angela Merkel – showing that despite presiding over a rather dull institution, he can afford a joke or two:

“I must acknowledge [Merkel’s crisis management] without envy, it’s a great achievement. It’s like in football. The game lasts ninety minutes and the end Germany always wins, as they say in England, even if this is not true. In the European Council, it is usually 26 against one. In the end, however everyone agrees with Mrs. Merkel.”