The AIFM Directive: It’s back! 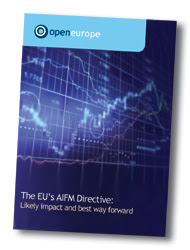 Some of you may recall the AIFM Directive, tabled by the European Commission in 2009. The proposal was aimed at striking down on hedge fund managers, private equity firms, investment trusts and other so-called “alternative investment” funds (i.e. those that do not invest in stock, bonds or cash), in the wake of the financial crisis. That there was absolutely no evidence that these funds had much to do with the crash in the first place seems to have been a secondary concern. That Commission President Jose Manuel Barroso was seeking support from socialist MEPs for his re-appointment was likewise just a coincidence…

Now, as we argued in the first comprehensive impact assessment of the proposal, the industry does need more transparency and accountability, so in that sense, the Commission was correct in looking at new regulation for this sector. But the Commission’s original proposal was fundamentally flawed. Leaving aside the huge number of technical details involved (for a wider discussion see here and here), the original proposal would have paved the way for a world in which investors in these funds, the managers of them, their custodians (that hold the assets of the funds) and the funds themselves were all confined to a life either within the EU’s borders, or a life outside them. This was clearly contrary to best industry practice (for example by increasing concentration risk), the nature of modern finance (which is inherently mobile, global and cross-border) and would have also contradicted the 2009 April G-20 summit conclusions, which instructed world leaders to

To their credit, MEPs and national ministers, following 18-20 months of negotiations, adopted a far more sensible version of the proposal which kept many of the Directive’s transparency provisions while aligning most of the other rules with global economic realities and the need for inward investment into Europe.

“The Commission is the dark horse in all of this. The way the Directive is written leaves the EU executive unusually large room for manoeuvre in deciding key aspects of the legislation – including leverage levels, valuation standards and restrictions on short-selling – either in the implementation phase or further down the road.”

This is because, in the so-called Comitology stage, the Commission has the power to lay down ‘technical’ or ‘supplementary’ standards when these are specified in the proposal, with limited involvement from MEPs and member states (for a background see here).

As reported by the FT this morning, this is precisely what the Commission is now seeking to do, in several ways, including

Now beyond the boring technical details, this is politically interesting for at least two reasons:

This will go on for some time and we should not jump to conclusions – and clearly, the industry has its own agenda as well. But, the episode is a reminder of one thing: in EU politics, proposals and laws have a curious habit of always coming back.