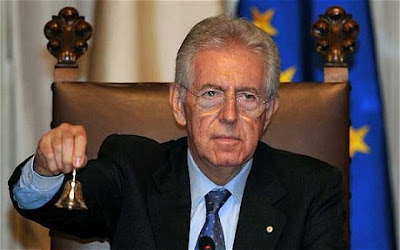 Over on EUobserver, we take a look at what can be described as the “Monti paradox”:

One of the main reasons why the euro crisis has calmed down is Mario Monti – the Italian Prime Minister who replaced Silvio Berlusconi last year, and who now heads a ‘technocratic’ government of professors, economists and former government officials.

But while Monti is pushing through some vital changes in Italy, his lack of a clear mandate from voters could backfire – and spell big problems for the eurozone. There’s clearly a paradox here: Monti took over from Berlusconi (who really was a disaster) following pressure from Berlin and Paris, and runs a government with no directly elected politicians as members.Understandably, this left many worrying about the state of national democracy in Europe. But, at the same time, Monti has so far proven surprisingly popular.

In the polls, his approval ratings have been around 50-60% and he still enjoys strong (but not unconditional) backing in the Italian parliament. That he draws such levels of support should help, as Monti – an economic liberal educated in the US – is intent on driving through some serious structural reform in Italy, finally pushed by markets to do so.

Heaven knows Italy needs it, particularly in the labour market. At the moment, it’s easier to cross the Alps with elephants than to fire someone in Italy, meaning that it’s also extremely costly and cumbersome to hire people. Under the current system, almost anything can count as ‘unfair’ dismissal and judges have huge power to order employers to hire back workers, even for the most trivial reasons. The Italian system goes far beyond other countries with rigorous dismissal procedures, such as France.

For example, one famous case saw an Italian worker, who had called in sick, being filmed while he was taking part in a protest against a trade union leader in Turin (double irony here). Naturally, his boss decided to fire him as, under any reasonable definition, the worker was taking his boss for a ride. However, the worker appealed the case in Court, claiming ‘unfair’ dismissal. The judge sided with the worker and ordered the employer to hire the guy back. His lawyers maintained that the illness he was suffering from prevented him from doing his job but not from engaging in various other activities, including, apparently, protesting in a rally.

Monti is seeking to deal with such abuses by doing what common sense would suggest – radically changing the way ‘unfair dismissals’ are dealt with under Italian law. According to his plan, workers will have to be re-hired only if they have been victim of genuine discrimination (but, in all other cases of ‘unfair dismissal’, workers will still have the right to claim generous compensation).

Monti is also trying to push through a series of other key changes to Italy’s labour market, including making it easier for young workers to be put on permanent contracts and opening up professions such as chemists and notaries.

As is always the case when trying to change entitlement cultures, the road ahead for Monti looks rocky, with Italy’s biggest trade union planning a series of counter-attacks and the centre-left parties pledging to water down the measures in Parliament. And herein lays the risk: Monti has no popular or electoral mandate to fall back on when the going gets tough.

The governments in Spain and the UK are facing strikes and discontent as well, over tough reform measures. But, save coalition complications in Britain, both governments can always point to the mandate that they got from voters in a general election, even when the opinion polls turn against them.

Monti does not have that luxury and already there are signs that support for him is dwindling, as his reforms become better understood. A recent opinion poll showed support down from around 60% to 44% in less than one month, casting doubts as to whether he’ll stay until 2013, the end of his scheduled term.

This begs the question, what happens to his support once the reforms really start to bite, and his lack of a popular mandate really becomes apparent? The risk is that he ends up not only an unelected but also a deeply unpopular Prime Minister that is forced out before the reforms – which must be pushed through with patience and persistence over a number of years – have been completed.

The best scenario would perhaps be for Monti himself to run in the elections in 2013 (or even earlier), to get that clear mandate and get on with business.

Because who would take over from Monti? Support for single political parties in Italy is shrinking, and none of them look able to secure an absolute majority on their own, so we’re looking at another complicated coalition.

A centre-right one is more likely to continue Monti’s work though that is by no means a guarantee, while a centre-left alliance, which might feature smaller left-wing parties, could even reverse Monti’s reforms. If that is the course of democracy, so be it. But there should be no doubt that without the reforms currently being planned, Italy – and its €1.9 trillion debt mountain – will remain a huge liability for the eurozone.

Technocracy may be working in Italy for now, but at the end of the day, there is no replacing the power and conviction that only democratic legitimacy can provide.