Who were the naughtiest Europeans of 2011?

No, this is not another one of those taxpayer funded EU awards. This is about what takes place beyond the rhetoric, political horse-trading and posturing amongst ministers and diplomats in Brussels. This about the tiny matter of actually implementing the measures that you’ve agreed and signed up to. Surely, that must constitute a key qualification for being a good European?
The European Court of Justice (ECJ) has just released its annual report of activities for 2011, and a specific graph caught our attention: 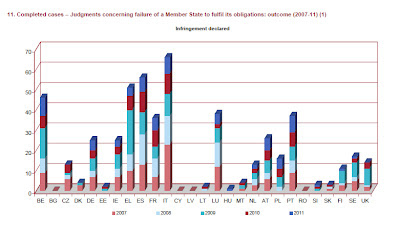 The graph illustrates the number of “Judgements concerning failure of a member state to fulfil its obligations” – in plain English, the number of times a country either broke or refused to implement EU law. We note that ten member states, including countries as diverse as the UK, Bulgaria, Denmark, Latvia and Slovakia, ended 2011 with a clean sheet. Gold stars to them.

In contrast, Belgium was the naughtiest EU member state of last year, with the ECJ ruling against the country for failing to implement EU law no less than nine times. Various southern European countries were pretty naughty too: Italy and Portugal were slapped with eight rulings each, and Spain seven. France and Germany were both pretty naughty Europeans as well, losing six and five cases respectively, while Greece lost four.

Taking the longer view, the picture looks worryingly similar. Between 2007 and 2011, the UK lost 14 court cases for failing to implement EU law, while Germany lost 25, France 36, Spain 56 and Italy 66. It is also noteworthy that the newest member states are much better at implementing EU law than the EU’s founding members.

We cannot help but to flag up the irony at play here. Countries that have traditionally put themselves forward as champions of European integration have a pretty appalling record in abiding by EU law. While this is nothing new, it should nonetheless challenge lazy assumptions and labels such as being “good” and “bad” Europeans.

A bit like the “good citizen” being defined as someone who is excellent at dreaming up new laws but with a terrible habit of then breaking them.
Isn’t a good European someone who wants the EU to regulate far less but far better and with far better and pointed implementation of the laws that are agreed? Someone who wants a slimmed-down EU based on substance rather than one based on rhetoric?

We know the answer, do you?