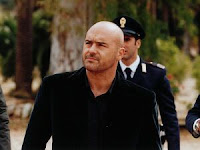 Apparently yes. Here’s a peculiar story which is all over Italian media: according to Italian papers, the EU Fisheries Commissioner Maria Damanaki has written a letter to the 86-year-old, famous Italian writer Andrea Camilleri complaining – somewhat tongue-in-cheek, we hope – that the writer’s best-known fictional character is regularly and blatantly breaking EU law.

A bit of cultural background: Camilleri is the author of a series of best-selling crime novels, which have also been turned into successful TV episodes for Italy’s public broadcaster RAI. The main character of the novels is Sicilian police detective Salvo Montalbano – played by actor Luca Zingaretti in the TV version (see picture) – whose favourite dish happens to be small squids.

The problem is that the sale of so-called ‘baby fish’ for human consumption is forbidden under EU law. Thus, Commissioner Damanaki worries that every time Montalbano enjoys a portion of small squids at home or in his favourite restaurant, he sends the wrong message to millions of readers and viewers. She has therefore kindly asked Camilleri to change the eating habits of his fictional creation.

Damanaki writes on her blog,

I am a big fan of Andrea Camilleri, the well-known Italian writer who created Montalbano, and I intend to write him a letter to pay tribute to his work, but also to ask him to stop having the protagonist of his novels eating small squids: that is unethical!

The outspoken 86-year-old writer has said that he has not yet received any letter from Damanaki, but added,

Our question: If Camilleri refuses to comply, will Ms. Damanaki launch a fictional infringement procedure?