So what do Lib Dem voters really think about Europe?

Over on Lib Dem Voice‘s ‘Independent View’ we’ve published a guest post looking at the what the party’s voters and members really think about the UK and Europe, and how we think the leadership ought to respond:

In the polarised and often exaggerated UK debate on the EU, the Lib Dems have often been caricaturised by much of the press and Tory MPs as being unreservedly in favour of greater EU integration or even an ‘EU super state’. The truth is of course far more nuanced.

That’s why a new YouGov/Cambridge cross-country poll out earlier this week is so interesting. It shows that a majority of UK voters (53%) support either no further EU integration or a looser arrangement. Only 14% said they wanted more integration. These attitudes span the political divide, with 50% of Lib Dem voters saying they wanted either a looser relationship with the EU or outright withdrawal. On the thorny question of whether primary responsibility for specific policy areas should lie with national capitals or Brussels, Lib Dem voters want more national control over areas such as police and crime, employment laws and trade almost as much as the average UK voter, and even more on agriculture. 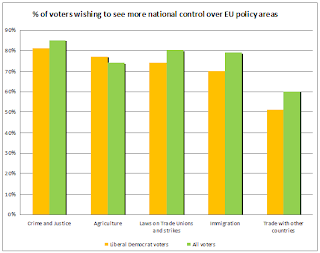 Similar trends can be seen in the Voice’s own polling (here and here) suggesting that both Lib Dem members and voters would reject working closer economic and political union in Europe. But while Lib Dem politicians have criticised individual aspects of EU policy, such as the Working Time Directive or the Common Fisheries Policy, on the whole the party leadership has so far not put forward an alternative vision for the EU-UK relationship.

This is worrying for two main reasons: first, as today’s poll show, the gap between what voters and the political party think on Europe is widening – a trend which is seen in party politics acrossEurope. This isn’t healthy in the long-run. Secondly, the eurozone crisis is changing the wayEuropeoperates, pulling those countries that share the single currency closer together, forcing those outside to decide what kind of relationship they want with the core. In short, the status quo is no longer an option. Britain needs a new vision for European cooperation, and so do the Lib Dems.

The principles of localism, which have been overwhelming endorsement by the coalition, and the Lib Dems in particular, could serve as the basis for a new, positive vision of Britain in Europe. In a recent report, entitled “The Case for European Localism”, Open Europe argued that the EU ought to focus more its core competencies of boosting trade and the Single Market, and less on political institution-building. National parliaments would be accorded a more prominent role in EU affairs, something that would increase democratic accountability and transparency. Far more decisions should be made nationally, regionally or locally.

European localism would act as an overarching strategy, within which the UK could chose individual areas where it wanted to maintain a bigger role for the EU, such as environmental policy, but devolve competencies over other areas, such as crime and policing, regional policy, agriculture or social and employment law.

With overwhelming backing from voters, the Lib Dems have a valuable opportunity to capture the centre ground on the EU debate and fashion a new, vibrant and more nuanced narrative that moves beyond the tired in/out debate.

How will the leadership respond?