Reuters has just released the latest EU/IMF/ECB troika report – the first to fully account for the bond swap and its impact on Greek debt. We’ll provide a fuller run down once we’ve had more time to trawl through the 195 page report (we have to give the troika some kudos for the turnaround on this one), but for now we’ll just flag up a few headline figures. We also couldn’t resist comparing the new Troika estimates to our previous estimates of how Greece’s debt will change following the bailout, which we published a couple of weeks ago. We would lie if we said we weren’t pretty much spot on.

(The discrepancy between the OE and Troika estimates primarily seems to be a consequence of the Troika report not including the near €6bn to pay off accrued interest, which doesn’t get lumped into the ‘cost of PSI’ but may fall into other funding costs). In any case still doesn’t seem like great value for money.

Other interesting figures include:

In addition, the graph below is pretty revealing. Given the optimistic privatisation targets and the optimistic growth projections the bold turquoise and dotted orange line give us some significant cause for concern to say the least. 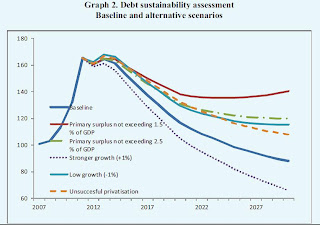