The grass is always greener: UK banks, the ECB and the LTRO 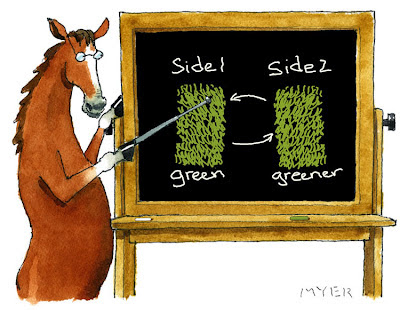 We’d figured this one would cause confusion once a paper reported on it.

This morning’s FT noted that RBS and Lloyd’s are considering borrowing from the ECB’s long term refinancing operation (LTRO). Remember, the LTRO is the ECB’s ‘bazooka’ response to the eurozone crisis, giving banks across the eurozone access to very cheap long term credit (aimed at avoiding a deep freeze in the banking system, e.g. banks stop lending to each other, which in turn could cause sovereign debt market drying up = Bye Italy).

That banks in Britain – a country that has refused to participate in euro bailouts – now ask for cash from the ECB looks pretty bad on the surface. At least for those not familiar with the ins and outs of central bank financing. And sure enough, the Left Foot Forward blog suggests that the ECB is now “bailing out” UK banks.

First, this is actually not new. RBS (€5bn) and possibly HSBC accessed the first LTRO back in December when there was little furore over the process and there has been little fallout since.

But more importantly these banks are providing collateral and borrowing under standard repurchase agreement (repo) terms. Their reason for doing this is not because they cannot borrow this money from the Bank of England or because they could not survive without it – which the Left Foot Forward blog and some others seem to believe – but simply because it is a cheap source of euros. These banks have extensive operations and exposure to the eurozone and therefore it makes practical and economic sense for them to tap the ECB’s lending operations if possible.

All the ECB is doing is taking on the exchange rate risk for these banks (similar to the US dollar swap line – see here for our analysis of this). These banks could obtain this money in pounds and then change it to euros, but then they would have to incur the cost of the transaction and hedge against the risk that the exchange rate could shift significantly over the period of the loan. The UK government or the Bank of England (BoE) could’t really fulfil this role, unless it set up a direct swap line with the ECB (which is redundant since these UK banks can borrow from the ECB directly through their subsidiaries – as they are doing).

In other words, this does not represent any extra risk for the UK or eurozone governments (since collateral is posted) or any failing on the BoE’s part, but simply the subsidiaries of the banks making a practical decision about how to help fund their exposure to the eurozone. Now, there certainly are problems with the LTRO and the risks it poses for Europe’s taxpayers in the eurozone long-term. If anything, it would be more concerning if taxpayer-backed banks did not seek to obtain funding at a lower comparative cost and cover their exposure to the eurozone crisis, given that the move is risk-neutral.

We would note the irony in that some in the UK are calling for ECB style unlimited three year lending to banks, while many in the eurozone are calling for UK style ‘Quantitative Easing’ – we guess the central banking grass is always greener…