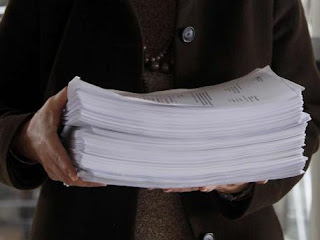 The picture on the left is not some random shot to illustrate excessive bureaucracy, it’s literally the document setting out the details of the second Greek bailout package, which German MPs just voted on.

As expected, the Bundestag voted to approve the package, by 496 votes in favour compared with 90 against and 5 abstentions. We’ll provide a breakdown of the votes alongside some further analysis in due course.

While approving the deal, many MPs were unhappy (Die Linke’s Kathrin Vogler specifically raised the issue) about having had only a few days to read through, digest and then analyse a document which came to no less than 726 pages, including hugely complicated issues such as explaining different options for bond swaps, how the swap would work and the impact on Greece’s debt sustainability (and therefore the risk to German taxpayers).

The agreement was only reached in the early hours of Tuesday morning, and the Bundestag’s budgetary committee only looked into the details on Friday, meaning ordinary MPs only got hold of the documentation over the weekend.

This begs the question, how in the world are MPs supposed to fulfil their role scrutinising the decisions reached by governments. The bailout took eight months to organise, now MPs were expected to approve it with a weekend’s notice (at least with respect to the details). Given the number of unanswered questions and heroic assumptions on which the agreement shakily rests, this is a pretty scary situation.

In fact, if this is the future of parliamentary/constitutional democracy in the eurozone, you’d forgive national parliaments for believing that is a price not worth paying for keeping the eurozone intact.