Money vs Democracy: What The European Press Said Of The Second Greek Bailout 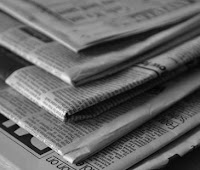 As the negotiations on the second Greek bailout went on until 3.30am on Tuesday, Europe’s papers weren’t able to provide a response to the agreement until yesterday. Here’s a round-up:

As usual, we would like to start with Germany. The front page of Die Welt ran with an unequivocal headline,

Europe: Welcome to the Transfer Union

Prices must fall if Greece wants to compete with its neighbours in agricultural products or tourism. Such an adjustment usually works via the exchange rate with the devaluation of the own currency. But members of the monetary union have relinquished this instrument. In Greece wages and prices would have to fall by half in order to become as successful as Ireland. That is too much – there is a lack of will and force. Therefore, a third credit package is coming – or the farewell to the euro.

Europe is being radically changed. With regulations in a Socialist-style language the EU is trying to govern nation-states…The kind of consequences this has can now be seen in Greece. There, the government is actually thinking of changing the constitution, at the request of the EU, to give absolute priority to debt repayment.

[Greece] is de facto being completely put under custody…This has nothing to do any longer with the normal democratic order of a sovereign state.

To continue with ‘Northern’ Europe, this is what Carla Joosten wrote in Dutch magazine Elsevier,

The euro has condemned European citizens to deal with each other more than they may really want to. Can Europe go on this way?

A leader in Belgian magazine Knack carried the headline,

Greece must choose between money and democracy.

The article is particularly critical of German Finance Minister Wolfgang Schäuble’s idea of postponing the Greek elections, due in April, and questions how it is possible that such proposals,

Europe enters into the heart of the state’s supreme authority, showing that monetary and fiscal policies are now detached from the sphere of the nation’s exclusive prerogatives.

This European way out of the crisis in which national institutions democratically elected by citizens are gradually losing the effective ability to rule their countries…to the advantage of European institutions chosen by states will do nothing but distance even more the citizens from the so-called European project.

So what’s the alternative? Well, get prepared to read something pretty unusual among Spanish academics,

Greece’s temporary suspension from the euro and the circulation of the new drachma in parallel would allow for the effective devaluation of Greek prices and costs, once and for all and without so much social discontent.

For those who love ancient Greek history, Nick Malkoutzis took inspiration from the ‘marathon negotiations’, arguing in Greek daily Kathimerini,

Marathon can refer to one of two things: one of the most decisive battles in history, in which the ancient Greeks repelled the threat of the Persians and a disastrous future, or the long-distance race which marks the lung-busting effort of messenger Pheidippides to inform the Athenians of victory over the invading army…Where these two allegories might cross paths in the case of modern Greece in the wake of the Eurogroup’s bailout decision is that the country might escape the clutches of disaster but its people, like the ancient messenger, might collapse from exhaustion.

Not sure we can call the following comment piece a ‘reaction’ to the second Greek bailout, given that it was written ahead of Monday’s Eurogroup meeting. However, French columnist Nicolas Barré made a very good point in French business daily Les Echos,

Two years ago, European leaders concealed the gravity of the situation of the sickest economy of the eurozone, and pretended to believe that, with some tens of billions of aid, [Greece] would be put back on its feet and miraculously regain the markets’ confidence. Not only was this a complete failure, but such a denial of reality also undermined the credibility of the eurozone as a whole and contributed to make the crisis worse. So that nowadays it’s frankly paradoxical that the more cautious, those who warn against the risks, those who don’t rule out a Greek default in the coming months, are relegated with disdain into the ‘anti-European’ camp.

And here’s what François Roche has written in La Tribune,

Over the coming years, Greece will be watched over by an impressive number of EU and IMF observers. It must commit, in its constitution, to prioritising the reimbursement of its foreign creditors. Can this stand up to the exasperation of [Greece’s] public opinion and part of the political class? For the first time in the history of the European construction, a member state is deprived of part of its budgetary policy prerogatives.

What about voices from outside the eurozone?

The crisis is not only about the survival of the euro. A rescue package for democracy will be required as well. Even more secret meetings and ingenuous but incomprehensible agreements between the representatives of the political elite are not enough to save the European project.

Trading sovereignty in exchange for financial assistance could be acceptable if it were a temporary measure, until Athens is ready to stand on its own feet again. However, this is not going to happen – the agreement reached in Brussels contains…utopian macroeconomic assumptions regarding Greece’s debt, deficit and growth prospects which could only be achieved if Greece were to completely overturn its economic, administrative and political system and replaced its pathology with a healthy state and economy…Let it be a warning to others.

We are sure that, after this ‘marathon’ of comments, you are still curious to know what we said in reaction to the second Greek bailout. We published a comprehensive response on our blog, which you can read here. In addition, over on the Telegraph‘s blog, we argued,

New debt issued by the Greek government in 2014/2015 will essentially be junior to existing debt. This raises the question why private creditors would want to purchase Greek debt at all in three years’ time, given that they would be first in line for any losses if Greece’s economy goes down the tubes. Taken together with the tough austerity targets which could choke of any chance of recovery, as the [debt sustainability analysis] admitted, this may force Greece to seek another €50bn bailout after 2014 [as investors will have little incentive to hold Greek bonds].

This is enough reaction for one day, but if you want to stay on top of the latest developments in the eurozone crisis, follow us on Twitter @OpenEurope.