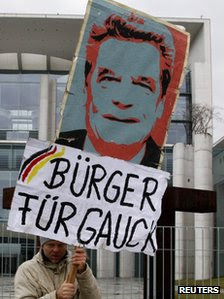 Following the resignation of Germany’s President Christian Wulff last week after a long drawn out affair involving an undeclared loan from a businessman (not the most salacious scandal ever), Protestant pastor and DDR human rights activist Joachim Gauck has been nominated as his replacement by the governing CDU/CSU and FDP coalition, with support from the opposition SDP and Green parties. This means he is virtually guaranteed to secure the position after a parliamentary vote (German Presidents are not directly elected).

However, his nomination was far from a smooth process, with the junior coalition party, the FDP, pulling off an extraordinary coup by instating Gauck ahead of more ‘establishment’ candidates preferred by Merkel. The FDP has had a tough time of late; derided for its lack of effectiveness and credibility (its promised tax cuts not deliverable in the current climate), riven by internal infighting (not least over the eurozone bailouts) while opinion polls consistently put them under the 5% required to win Bundestag seats. The party therefore saw the ‘Presidential poker’ – as the German media dubbed the nomination process – as an opportunity to hit back and outmaneuver Merkel by working with opposition parties to install Gauck – the people’s choice – as opposed to another of her political allies, like Wulff had been.
Although it remains primarily an issue of internal German politics, the wrangling over Gauck’s nomination could also have a significant impact on wider eurozone politics. Firstly, there is the internal fallout within the coalition, with CDU/CSU politicians furious at what they see as the liberals’ “betrayal”. Der Spiegel notes that the atmosphere in the coalition has been “poisoned” with FDP leader and vice-Chancellor Philipp Rösler and Merkel reportedly having a furious exchange before the latter agreed to concede on the issue. Somewhat mischievously, the Greens’ co-chairman Cem Özdemir commented that:

“In the darkest days of the cold war, trust between the Soviet Union and the USA was better than trust [between the parties] in this coalition.”

While a break-up of the coalition and early elections look very unlikely, not least because of the FDP’s dire polling figures, there has been much speculation that the party’s actions during the ‘President poker’ should be interpreted as positioning for a potential future ‘traffic lights’ coalition (SDP + FDP + Greens). Following last weekend’s success, it could well be the case that the FDP will adopt further attempts at ‘differentiation’, putting a strain on the unity of the coalition. This could have potentially serious consequences given that the eurozone crisis could well take another turn for the worse, for example if Portugal is found to require further assistance, or if the agreement on Greece’s restructuring and 2nd bailout started to unravel.

The second way in which Gauck’s nomination could be significant is the potential for him to challenge Merkel’s handling of the crisis, if he feels that too many constitutional rules and democratic principles are being circumvented. While the position is largely ceremonial, it does also carry some political clout, with the public looking to the President for leadership beyond the realm of party politics, particularly in such a time of crisis. As a leader in yesterday’s Welt argued:

“[Gauck] will be a strong president. His word will carry weight next to that of Angela Merkel. It may well be that Merkel is not really comfortable with that prospect.”

Another comment piece in the same paper added that:

“Gauck is a real trumpeter for civil society… praising the ordinary, everyday variant of democracy, including its slow pace and its unsightly political machinery… he will always have something to say.”

Given the ongoing debate in Germany about constitutionality, democracy and transparency in the context of the crisis, it will be interesting to observe how Gauck,

a committed pro-democracy activist who is certainly not afraid to speak his mind, will respond if the demands of crisis management continue to put these under pressure. As an independent figure, Guack will be free to act in a way that Wulff, who owed his position to Merkel, was not. This is certainly an area worth keeping an eye on, not least on March 18th, when the new President heads on a state visit to Greece…