Has Schäuble given up on Greece? 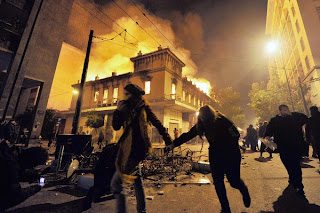 It is estimated that 80,000 took to the streets of Athens yesterday to vent their anger at the latest round of bailout austerity. Another 20,000 reportedly protested in Thessaloniki.

After days of talks, Greek MPs finally approved the latest round of measures required by the EC-ECB-IMF troika. The vote was carried by 199 in favour to 74 against. But the Coalition parties expelled 43 deputies for failing to back the bill.

Police said 150 shops were looted in the capital and 48 buildings set ablaze. Some 100 people – including 68 police – were wounded and 130 detained, a police official said this morning.

While condemning the violence, Prime Minister Lucas Papademos conceded yesterday that, “The full, timely and effective implementation of the program won’t be easy. We are fully aware that the economic program means short-term sacrifices for the Greek people.”

The problem is that “short-term sacrifices” is rather optimistic. Everyone recognises that Greece needs to reform, and no one could fail to be shocked by yesterday’s scenes, but the Greek people also need to be offered some hope of a brighter future. Given that the plan for Greece is for it, in 2020, to be in more or less in the shape that Italy is in now – and many would suggest Italy’s situation is unsustainable in the long-term without its own dose of reforms – the structural change required in Greece looks to be well beyond what the country can take.

At the weekend, German Finance Minister Wolfgang Schäuble seemed to be reaching a similar conclusion. He said in an interview published in the Welt am Sonntag newspaper that, “The promises from Greece aren’t enough for us any more. Greece needs to do its own homework to become competitive, whether that happens in conjunction with a new rescue programme or by another route that we actually don’t want to take.”

When asked if that other route meant Greece quitting the eurozone, Schäuble said: “That is all in the hands of the Greeks themselves. But even in the event [Greece leaves the eurozone], which almost no one assumes will happen, they will still remain part of Europe.”

Today, FT Deutschland quotes sources involved in the bailout negotiations suggesting that Germany’s position on Greece is hardening to such an extent that it would actually now rather see Greece default. “Germany confused everyone else” in the negotiations, complained one. The paper also suggests that observers in the CDU are noticing a rift between Schäuble and his Chancellor. “Schäuble supports the bankruptcy of Greece, Merkel wants to strictly avoid it,” said a leading member.

However, it seems that some in the German government may finally be beginning to realise that they are flogging a dead horse.