Another exposure which could sink Greek banks? 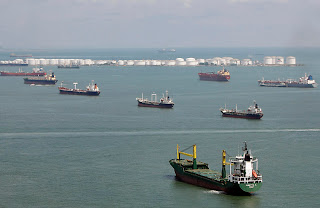 An interesting but niche issue has come to our attention recently in relation to the on-going troubles in Greece. The ‘Baltic Dry Index’ (a measure of global shipping demand/prices) has fallen for a month straight to record lows. When this index falls it suggests that there is trouble in the shipping industry, raising questions over the stability of shipping firms. As it turns out many of these firms have secured their financing from Greek and other European banks – meaning if they start defaulting on their loans these banks could take losses. This raise further questions over the bank recapitalisation plans and whether such contingencies have been thought of in the second Greek bailout (which sets aside €20bn for Greek banks).

As a recent NYT article noted:

“Basil Karatzas, the chief executive of Karatzas Marine Advisors, a ship brokerage and finance advisory firm in Manhattan, estimated that European banks hold about $500 billion in shipping loans on their books and face nearly $100 billion in losses to restructure them.”

Furthermore, not only does global demand seem to be faltering (although the index may not be the best judge of this), there is also a massive over supply of ships – due to orders put in during the boom period in 2008 which are only just being completed now (the equivalent of 22.7% of the cargo shipping fleet is due be produced this year alone). This suggest a combination of supply and demand issues which means this could become a lasting problem and will not just be tackled with a boost in growth in Asia.

Data on exposure to shipping loans is scarce, but in 2010 Greek banks had a portfolio of $16bn just on Greek owned shipping. Other European banks had about a $50bn exposure. Of this the 4 largest UK banks had $16bn and 10 German banks had $18bn.

The volatility of the index should be kept in mind but it’s an interesting fresh angle on the problems in Europe. If things keep going badly in the shipping sector, which it seems almost certain they will, some banks could face an increase in the level of non-performing loans on their books. Given that capital buffers already seem to be spread pretty thin this could cause problems. Of course this could take time to have an impact, if it does at all, but worth keeping an eye on.