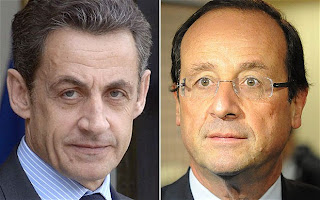 The politics of the eurozone crisis took several new twists and turns over the weekend, including the news that Angela Merkel intends to step in and “actively” support Nicolas Sarkozy’s Presidential re-election campaign (although he is yet to formally announce his candidature) against the Socialist candidate Francois Hollande. It is understood this involvement could take the form of joint campaign appearances.

Moreover, Hermann Gröhe, a senior member of Merkel’s CDU party did not mince his words when he commented on the election, claiming that:

“[Sarkozy] is the right man in the Elysée now and in the future…We need a strong France with a strong president in charge…The Socialists are stuck in their dreams of the past. All they are doing is bringing out dusty concepts and wealth distribution fantasies from their moth-ridden policy cupboard.”

In recent months, Hollande’s candidacy has become the focal point of opposition to Merkel’s crisis management strategy and the ethos that underpins it – symbolised by the treaty on closer fiscal integration and discipline. Hollande has promised to focus less on austerity and more on promoting jobs and growth, both in France and the eurozone; he has pledged, if elected, to re-negotiate the treaty so that it focuses less on ‘stability’ and more on ‘solidarity’. Although Sarkozy signed up to the treaty at yesterday’s summit, the French parliament will not have an opportunity to ratify it before the presidential elections.

The stakes are therefore high for Merkel who has a lot political capital – both domestically and internationally – riding on the successful transposition of the treaty into domestic law throughout the eurozone (even if it is debatable as to whether it will address the root causes of the crisis). Given that polls consistently give Hollande a clear lead, Merkel has decided that in order to protect the treaty in its current state, she will have to intervene. While it may be unpopular with her own MPs who consider it to have been watered down too much, she knows this is nothing compared to how it would be affected by a likely Hollande victory.

The big question is whether Merkel’s endorsement will be to Sarkozy’s benefit or detriment; it certainly jars with his recent media strategy of playing the humble do-gooder trying to make the best out of a bad situation. It is likewise no secret that due to Merkel’s (perceived) lack of willingness to compromise on issues such as eurobonds or the ECB, both she and Germany as a whole have become the pantomime villains of the crisis. There is also potentially the risk of a backlash against Sarkozy if the French public feels that Merkel has crossed the line and is actively trying to meddle in their domestic political arrangements.

Ultimately however, both Merkel and Sarkozy will hope that as suggested in the FT’s editorial this weekend, the French public will vote with their hearts in the first round, and with their heads in the second. While they cannot win in the popularity stakes, they will count on the fact that the public will at least recognise that they have taken tough but necessary action to tackle the eurozone crisis, and that for all his rhetoric, Hollande lacks a credible plan for making the French economy competitive. There are some grounds for optimism – a poll earlier this month found that 82% of respondents had a positive view of Germany, in particular regarding its leadership and work ethic. Finally, it is worth remembering Merkel is not renowned as an astute political operator for nothing; evidently she has decided Sarkozy’s re-election is not a lost cause.