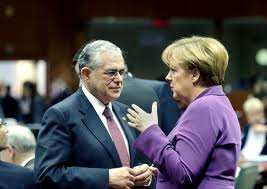 Despite being locked together in economic turmoil for almost two years, the reports which emerged over this weekend further suggest that Germany still does not understand the depth of some of the problems facing Greece (and that they cannot be tackled by a one dimensional policy).

We are of course referring to the leaked German proposal calling for Greece to cede budget sovereignty to the EU. Naturally, this is an impossible claim and was roundly rejected by Greece and the Commission, while German officials have spent the weekend trying to douse the flames behind the scenes.

It is not clear whether or not this was ever a serious proposal on the part of the German government, although stern talk from the German Finance Minister Wolfgang Schaeuble and the Economy Minister Philipp Roesler suggested that the sentiment behind the proposal was real enough. We will not dwell on the obvious and well documented political and democratic questions which this raises – it is clearly a step too far which could and would not ever be accepted by the EU in the current framework. There has been talk of a Eurozone finance ministry at some point in the future, but this stands apart from asking a single country to undemocratically cede control of taxation and spending to the EU- meaning the proposal was destined to sink as soon as it hit the water.

This substantial issue aside, the sentiment behind the proposal reveals a continuing misunderstanding of the Greek problem from the German government. Despite all the talk of “growth and jobs” in recent days, it is clear the emphasis is on austerity above all else. It also raises serious questions about Germany’s belief that Greek debt could ever be sustainable under Greek control – which should be a concern for German citizens since they are about to finance the largest share of another €130bn bailout.

Fundamentally though, as a recent OECD report noted, the problems within Greece run a lot deeper than just the ability to agree on the ‘right’ policies. For all its shortcomings, the Greece has instituted a multitude of deficit and debt reduction plans over the past year. However, the real issue comes with the implementation of these reforms, as the OECD comments:

“Ministries take decisions but these are often not reflected in concrete results. A succession of reforms launched in recent years (including reforms of the administration) did not bring the expected results, due to poor implementation.”

So, the problems do not necessarily lie with the politicians or the top level civil servants (or at least they do not stop there) meaning that shifting top level control to the EU would make very little practical difference.

These problems cannot be tackled overnight or by simply imposing more austerity. Germany has continually refused or failed to understand the nature of the problems facing Greece despite much of the public posturing. With the outcome of the Greek restructuring negotiations still far from clear, a change in tact is needed – although it could well already be too late.