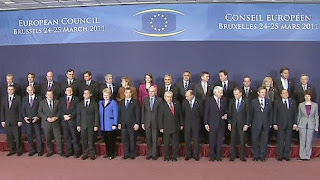 Ahead of the first (full) EU summit of the new year, we’ve put together our thoughts on what progress to expect.

As per usual there are lots of topics to be discussed but we don’t expect too many concrete decisions. We’d expect a final draft of the euro fiscal pact to be completed, some progress on ESM – the eurozone’s permanent bailout fund – and a commitment to “growth and jobs” (as opposed to recession and unemployment..?). Huge questions over Greece and size of bailout funds will probably remain. Below we outline the key issues to watch out for (take 2):

Fiscal pact: This should be last round of discussions on the new European treaty. The aim has always been to have the final draft completed by end of January. However, there are still a few issues which need to be resolved.

The key interaction is between how the rules will apply to those non-eurozone which sign the pact and how much influence they will have (i.e. how many meetings they get to attend and what decisions they will have an impact on). Sweden, Poland, Denmark and the Czech Republic will make their decision on whether to sign based on how this plays out. The final agreement won’t be finalised as the Czechs and Irish will still have to decide whether to hold a referendum on the treaty. Expect it all to be tied up at the March summit.

Our bet is on the Poles, Danes and Swedes signing up if they’re guaranteed some sort of place at the table and if the rules of pact actually don’t apply to them – creating a rather bizarre situation.

The UK and the use of EU institutions: We suspect that Cameron will reluctantly accept the formulation in the fourth draft of the fiscal compact which gives the ECJ the right to slap fines on member states for not implementing the pact’s spending ceilings. Technically, this marks an overlap between the fiscal compact and the EU treaties – something which Cameron has argued against in the past.

ESM treaty: Behind the scenes negotiations have been on-going, so the draft should be fairly far along. The biggest sticking point was the use of Qualified Majority Voting (QMV) to make decisions within the ESM, which Finland objected to. There now looks to be a compromise. The Finnish Constitutional Committee announced today that it approves of the new wording in the ESM treaty, whereby QMV is used to disburse loans but for any change in the size of the ESM a unanimous decision is needed. The Grand Committee (representing the Finnish Parliament) will rule on Monday and is expected to support this position. This is pretty big.

Additionally, there should also be a discussion on the size of the ESM and whether the ESM and EFSF can run in parallel. It’s hard to read Germany on this issue. There have been indications that Germany may be willing to let ESM and EFSF run together, but it would want the fiscal pact and Greece sorted before it is considered. It’s likely the topic will be broached but final decision will be delayed until March.

Greek restructuring: EU leaders are unlikely to have a deal ready to present at the meeting so it may be more of a general discussion. Even if a deal is achieved, which reconciles the differences between Greece and its bondholders over the level of interest paid on the new bonds, there is still the huge question of holdouts and ECB. Expect these issues to be covered along with talk of increasing the size of the second Greek bailout and losses for public sector – but don’t expect any big movements (at least not publicly).

Growth and jobs agenda: EU leaders have been pushing this ‘new’ agenda recently. After coming in for massive criticism for their undying commitment to austerity, they are keen to focus on boosting competitiveness, promoting growth, creating jobs and the like. Despite that, as of yet a coherent policy agenda to achieve this has not been formulated – most of the time there is just a broad commitment to ‘structural reforms’.

We expect much of the same from this meeting – leaders (David Cameron in particular) will play up the renewed focus on growth rather than just austerity but it remains unclear how much difference the EU can make on this front. Ultimately, national governments need to push ahead with long term changes to the structure of their economies (labour market reforms, increased education and training, investment in R&D, increased competition etc.) This will take time, money and political will, all of which the eurozone is short of at the moment.