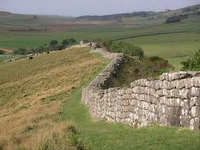 The last time there was a formal English border with Scotland was under the Romans, although for some parts of the middle ages both England and Scotland may have wished for one. Since then, it’s pretty much been come and go as you wish. Well, that may – at least hypothetically – soon change.

This week saw the debate over Scottish independence heating up again, in turn throwing up a number of questions about whether Scotland would have to negotiate new membership terms with the EU, and if so, how this would work. Most discussions have focussed on the euro – which all EU members that don’t have an opt-out (which only the UK and Denmark have at the moment) – are required to join.

But there’s another interesting twist. You might assume that if Scotland again became independent, the current open border would continue. Well, you could be wrong. This is because while the UK has a specific opt-out from the EU’s common travel area (the Schengen agreement) under, the Amsterdam Treaty incorporated the Schengen agreement into EU law (Article 77, previously it was a stand alone agreement), meaning that whoever signs up to the full body of EU law, also signs up to Schengen. In other words, similarly to the euro, Scotland would not automatically have an opt out.

The EU considers that all states should join the borderless EU. This would pose a problem for an independent Scotland as the UK and Ireland have their own Common Travel Area and external borders – to help facilitate travel over the Northern Irish Border. If Scotland was in Schengen, England (and the rump UK and Ireland) would need to apply an external border and passport checks on the new frontier.

That is if Scotland was in the EU at all. The UK’s membership does not extend to former members. Scotland would therefore have to negotiate for itself an opt-out from Schengen as a part of its accession process from outside the EU.

In addition to a Schengen opt-put, an independent Scotland would also have to negotiate:

Plenty to play for in Europe, in other words, should Scotland wish to go down that path…