The draft euro fiscal pact: not great news for the eurozone either… 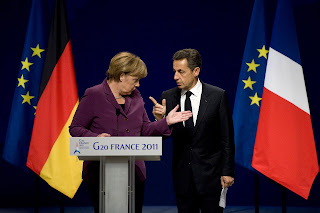 We’ve already reviewed what the latest draft version of the fiscal compact means for the UK (not much good) being the first in the UK to publish the draft of the compact (beating the Telegraph by a hair). But let’s not forget what the treaty is supposed to be about – saving the eurozone. There are still those out there, not least the ECB and the IMF, who believe that this treaty can form an integral part of the solution to the eurozone crisis (along with an increased firewall and structural reforms).

Looking at the latest version of the treaty it seems that not much has changed in the fiscal rules department. As always the 60% debt limit and 3% deficit limit provide the framework, while the 0.5% limit on ‘structural deficit’ is included as with the previous draft. There is no further detail provided on what exactly the ‘structural deficit’ is envisaged to be, although there are some qualifying statements which suggest such stringent rules could be waived in the case of “exceptional economic circumstances”. Still very vague with some key ideas not clearly defined. This doesn’t fill us with confidence. Remember this compact is meant to provide the original stability & growth pact with some teeth, by actually establishing some tools to enforce the fiscal rules.

Article 5 of the new draft suggests that the budgets of countries under excessive deficit procedure will be submitted to the European Commission and Council for “endorsement”. This isn’t much, if at all, different to the new six pack rules, while it again remains unclear what they mean by “endorsement” – will the Commission and/or Council retain a binding vote on national budget plans?

In terms of the overall debt level, the commitment for countries which exceed the 60% debt to GDP ratio to reduce their debt by one twentieth every year remains. However, this still raises lots of questions over implementation. Will this rule apply as soon as the treaty comes into force? Take Italy for example: if it was applied from this year, the government would have to potentially find a €108bn in savings or a 7% of GDP swing in the budget, in order to cut the debt by the required amount. This is more illustrative than anything, but the key point is the tension it represents. Realistically the rules cannot be enforced next year or possibly even the year after, otherwise too many countries would be sanctioned and be forced into ever greater austerity. However, to convince markets, there needs to be a clear plan for implementation and some signs that the immediate problems will be tackled. This latest version of the draft simply does not tackle these issues, nor do any of the wider discussions relating to the fiscal compact.

As we pointed out with our post on the draft’s impact on the UK, there is a widely increased role for the EU institutions. In particular, countries which are seen to have broken the fiscal rules can be taken to the ECJ by other members or the Commission. This gives the proposals significantly more teeth, but given the UK’s position it is far from a foregone conclusion that EU institutions will be able to play this role under the finalised new treaty. It also seems that much of the stuff in the compact can be done within the existing treaties anyway, begging the question why this, new over-lapping deal is necessary in the first place (and yes, we do appreciate German domestic concern).

Until the significant amount of uncertainty is removed from the fiscal compact – in terms of implementation, use of institutions, timeline, severity of sanctions and exceptions it is likely that markets will continue to be underwhelmed by it. Unfortunately, while these short comings persist eurozone leaders continue to meet and talk up their negotiations, which only seems to add to the eventual let-down.