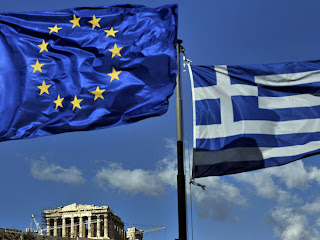 It would be a gross understatement to say that negotiations on the Greek voluntary restructuring/write-down/bond swap have been dragging on a bit. The initial idea was first proposed and adopted last July and has been the topic of almost permanent negotiations ever since. Recent reports have suggested that a deal is ‘close’, with Greek officials expecting it to be tied up by the end of the month.

However, given the headlines over the last couple of days, we’re not sure how close ‘close’ really is. We’re referring specifically to all the talk of a retroactive introduction of collective action clauses (CACs).
Excuse the jargon, but this essentially means that the Greek government is considering passing a law which will introduce a clause into outstanding Greek bonds which stipulates that if a certain percentage of the bondholders (usually 75%) agree to a restructuring deal, the remaining holdouts will, by law, also be forced to accept the deal. Seems like a strange move if a deal is just around the corner, doesn’t it?

The aim seems to be that by introducing the CACs the Greek government can ensure a high participation rate in the restructuring, increasing the chances of Greece returning to debt sustainability. This sounds like a reasonable idea on the surface but it raises a huge number of questions given the previous negotiations:

– Invoking CACs would surely constitute a credit event, meaning the restructuring would no longer be ‘voluntary’, leading to the pay-out of credit default swaps. We’ve long been advocates of a forced restructuring in Greece, but this is something which the EU and Greece have been trying to avoid since these negotiations began – it seems a strange turn of events to say the least.

– It has been suggested by some officials that the CACs will be put in place but not invoked, simply used as a negotiating tool or threat. This seems rather long winded (and feeds the idea that a deal is not imminent) but we’re fairly sure announcing it in advance is a poor negotiating tactic, even by EU standards.

However, by our reckoning, the most important issue it raises is over the bonds held by the ECB. As we have noted before, the ECB is now the largest single holder of Greek debt, having purchased a reported €45bn in Greek debt under its Securities Markets Programme (SMP). Up until now the ECB has been able to stay out of the restructuring discussions since they have been conducted on an ad hoc basis (the ECB has continually asserted that it will be holding these bonds to maturity).

Legally, though, the ECB is not a senior creditor and has the same standing as all other bondholders. If the CACs were introduced and invoked they would surely impact the ECB bonds as well. We have previously estimated that such write-downs could cost the ECB €12bn – €18bn, while Barclays recently put the figure as high as €20bn. Not the end of the world for the ECB, but it would be a huge blow to its overall approach to the eurozone crisis (particularly in terms of German support). Furthermore, resisting these losses could be more detrimental to the eurozone since it would essentially mark the ECB as a senior creditor, creating huge distortions in bond markets as investors become wary of the increased prospect of being the first ones to take losses.

So, the discussion surrounding CACs definitely brings a new element to the Greek restructuring issue. It’s very suggestion runs contrary to the claims, which all eurozone leaders have been making, that a deal is close. However, if it is a signal that Greece has realised that a voluntary restructuring may not be workable or be enough to make Greek debt sustainable then it could be a welcome turn of events towards a hard restructuring. As we have argued numerous times before, a Greek default is now unavoidable and will only become more expensive the longer it is put off – i.e. the sooner this is accepted and dealt with the better.