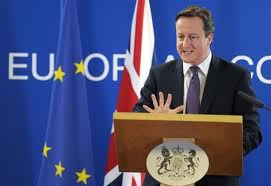 Much was said about business’ opinion of Cameron’s EU veto in the immediate aftermath of this month’s summit but, now that the dust has settled, the picture is starting to become much clearer.

Today, in a letter to the FT, orchestrated by Open Europe, 20 leading business figures express their support for Cameron’s veto and his willingness to “stand up for an outward-looking and competitive Britain.”

Here it is in full:

Sir, It is impossible to know just how European politics or economics will develop at this juncture. However, since the UK prime minister’s recent veto of a new European Union treaty, one major point of principle is clear: Britain does not want, or intend, to be dragged deeper into a more centralised and over-regulated EU with ambitions to become a political union.We therefore believe that David Cameron deserves the full support of the business community. On this occasion, he was seeking safeguards for the financial sector, still one of Britain’s biggest industries, employing more than 1m people and contributing more than £50bn in tax revenues, but the principle is applicable to many other sectors of our economy, including manufacturing, which employs more than 2.5m people.

Those who would portray Mr Cameron’s use of the veto as bad for jobs and growth or as leaving the UK “isolated” are mistaken. The real threat to employment is the euro crisis, which was unaffected by his veto and which the recent summit did little to address. Britain has great potential to compete across the globe, if freed from badly targeted and trade-hampering government intrusions, whether from London or Brussels. Irrespective of the fate of the euro or the ability of weakened southern European economies to prosper under severe austerity programmes, it is most welcome that the prime minister has shown himself willing to stand up for an outward-looking and competitive Britain.

Signed in a personal capacity

Meanwhile, an IoD poll has revealed that 77% of its members agree with the PM’s use of the veto, with only 19% disagreeing. The survey found that 63% of IoD members would like to see the UK in a looser relationship with the EU, including 42% who would like to see a repatriation of some powers.

Add to this our recent poll of financial services managers, before the summit, which showed that 69% supported the introduction of a British veto on EU financial rules even if it reduced access to the Single Market, and the picture is one of widespread business support not only for Cameron’s veto but for a more liberal and competitive Europe.