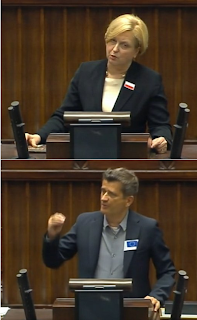 Yesterday witnessed a heated and fractious debate (a former Foreign Minister walked out in protest) in the Polish Sejm concerning the conclusion of the Polish Presidency of the EU and last week’s EU summit. Polish PM Donald Tusk kicked off the proceedings by stating that there is still a long way before the future of the euro, and consequently the EU, will be any clearer:

“I would be a happy person if I know the answer to the following question: What is the future of the European Union?”

“The attempted steps taken in Europe reveal not only the dysfunctionality of certain institutions and European principles, but how strong the disintegrative tendencies in Europe are…Poland can not become a part of the second or third ring… The biggest risk for Poland is the silent division of Europe…that the eurozone fixes itself and turns inward forgetting about the 27, soon to be 28.”

Tusk also emphasised that the decision about the new shape of the Union must not be a result forced through by three European capitals (he said it was not necessary to specify the capitals concerned, because everyone knew which ones he had in mind), but a decision made by the community as a whole.

The Law and Justice and Solidarity Poland parties accused the government, and in particular Foreign Minister Radoslaw Sikorski (following his controversial speech calling on Germany to play a more active role in Europe) of betraying Polish interests and sovereignty. They were also very critical about the possibility of Poland offering financial assistance via the IMF to countries with a higher standard of living than that enjoyed by Poland.

The clash of approaches was perfectly captured by the fact that Law and Justice MPs wore badges with the Polish flag, while MPs from the pro-integrationist Palikot’s Movement wore badges with the EU flag (pictured). Janusz Palikot, the flamboyant leader of Palikot’s Movement (yes he really did name his party after himself) well known in Poland for his use of props to illustrate his political arguments, want as far as to present Sikorski with the pen used by late President Kaczynski to sign the Lisbon Treaty in order to keep him on the path towards European Integration.

Looking at the bigger picture, it is clear that, on both sides of the debate, Poland sees the main challenge as one of avoiding Franco-German dominance of the EU, which circumvents the EU institutions and crowds out smaller member states. Polish daily Rzeczpospolita featured an analysis of the Polish Presidency which concluded it had been a “façade”, given that:

“as a result of the crisis, not only was the EU’s centre of leadership not in the country holding the Presidency, but not even in the EU Council, the European Commission or the European Parliament, but in two capitals – Berlin and Paris.”

The unease about the future direction of Europe is spreading fast.