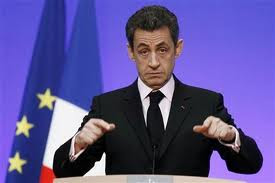 For all those who think that French President Nicolas Sarkozy will be sitting in the Élysée plotting some form of retaliation against Cameron, it has quickly become clear that he has much bigger things to worry about.

Rumours have once again been flying around that France’s triple-A rating is under threat and could be facing an imminent downgrade. These have become all the more serious by the numerous French government ministers that have publicly played down the gravity of any downgrade.

On Monday Sarkozy said that a downgrade would be “one more difficulty, but not insurmountable.” On Tuesday Valerie Percresse, French Budget Minister, made similar remarks saying, “The fundamentals of the [French] economy are good, and investors don’t doubt France will pay back its debts,” thereby playing down the impact of any downgrade. Finally, yesterday French Foreign Minister Alain Juppe said, “[A downgrade] wouldn’t be good news, but it wouldn’t be a cataclysm either. The United States lost their triple-A and still manage to borrow on the markets in good conditions.”

This public onslaught by the government on the cost of France losing its triple-A rating is widely being seen as a way of softening up the public and the markets for what’s coming. Ultimately, the impact of a downgrade on France will depend on numerous factors, not least: whether other countries are also downgraded, whether it is a one or two notch downgrade and the level of upcoming public and private financing which France faces immediately after the decision.

Our concern though is not about the impact on France. In fact the French government seem to be missing the bigger picture – the impact it will have on the eurozone bailout funds. The eurozone is already running short on money, at least in terms of providing a financial firewall to stop the crisis. As we noted in our ‘No Way Out’ report a downgrade would not be good:

Since the EFSF’s Triple-A rating relies on Triple-A countries, a French downgrade would also mean a downgrade for the EFSF itself. For such a downgrade to be avoided, the remaining Triple-A countries would need to substantially increase their share of the guarantees, transferring even more of the burden on the already reluctant German taxpayer – while also threatening Germany’s own rating. In all likelihood, under the increased EFSF scenario, a downgrade of France would trigger a downward spiral of ratings cuts due to the extra EFSF liabilities which would make the entire fund completely unworkable.

In any case, the French government may be softening up its population for a downgrade, but who’s going to soften up markets for the realisation that the eurozone bailout funds could be rendered close to useless (more useless?)….

Christian Noyer, Governor of the Bank of France, today launched an attack on the rating agencies (and the UK), suggesting that they are not basing their decisions on economic fundamentals and if they were the UK would/should be downgraded before France.

Noyer raises some valid concerns about the level of the UK’s debt, deficit, inflation and the dwindling credit availability – but he, like his colleagues mentioned above, misses the key point. The UK has full control over its own monetary policy and can balance it with its fiscal approach in any way desired. France however faces: a central bank whose thinking runs completely contrary to the government’s desires, an overvalued currency, increasing fiscal constraints due to its exposure to the eurozone crisis and a looming election (along with potential political divisions over the eurozone crisis). All in all, the UK may economically be in just as bad a position as France, but the UK has the tools to deal with its problems, the French government is, on the contrary, massively constrained.