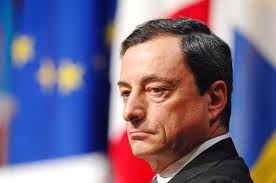 It’s been a whirlwind entrance for Mario Draghi as ECB President and today’s meeting of the Governing Council was seemingly no exception. The key decisions which came out of the meeting were much what we expected, although with a few twists, while more importantly Draghi tackled some of the interesting problems facing Europe fairly bluntly (for a central banker anyway).

1) 0.25% interest rate cut: Essentially needed to be done since markets had come to expect it and the prospects of a eurozone recession next year are looming large. Probably highlights previous rate rises as a mistake, at least in retrospect, has been shown up by eurozone leaders failure to tackle the crisis. The failure of a single monetary policy looks to have been papered over while eurozone contraction sets in, but when/if Germany starts growing quickly again (relative to the rest of the eurozone) Draghi will have some much tougher decisions.

2) Long term liquidity to banks (3yr loans): Widely reported that banks would struggle to secure long term financing without such a move (have €230bn in debt maturing in Q1 2012). Not ideal given the ever increasing dependence from the banking sector on the ECB, but should be seen as a one off. Hopefully will increase lending in the broader economy but this is not assured, especially since unlimited short term liquidity has failed to do so.

3) Easing collateral rules: Greater acceptance of asset backed securities (ABS) – sounds ominous. Not ideal but does come with clear criteria and conditions. There have been indications that banks are running short of viable collateral. Without such a move, this could cause deleveraging or force banks to shift to Emergency Liquidity Assistance (ELA) which accepts even worse collateral and is more secretive. This could, however, potentially propagate the movement of poor quality assets onto the ECB’s balance sheet.

– “The ECB is not a member of the IMF”: Draghi went to some lengths to stress that the plan for eurozone national central banks (NCBs) to lend to the IMF so that the IMF could lend “exclusively” to struggling eurozone countries would not be possible. One point which has been raised is that IMF money is fungible, so the NCBs could contribute to the IMF general reserve account which could then lend to eurozone members. In any case, Draghi made it clear he’s not keen on ECB or NCBs lending to the IMF and may try to stop any proposal, even if it isn’t de jure illegal.

– “We shouldn’t circumvent the spirit of the treaty”: Draghi said this countless times. He reiterated his opposition to increasing bond purchases. He also seemed to suggest he would reject similar ideas of ECB lending to states even if they could be justified as de jure legal if they were de facto illegal and broke the principles of the treaty.

– ‘Other elements will follow’ fiscal compact comment was misinterpreted: Interestingly, Draghi highlighted his surprise that his comments last week had been taken as an indication of increased bond buying, stating that he did not mean that in anyway. He suggested that he was merely highlighting the sequence of events, in that fiscal consolidation needs to come first and can then be followed by a backstop but only through the EFSF or the ESM, the eurozone bailout funds.

So, a strong expansion of monetary policy to help the banking sector a promote growth and stability. We may not be onside with all of his measures, since they may raise long term questions over what gets put onto the ECB’s balance sheet, but they are clearly within the realms of monetary policy. Using these mechanisms is always preferable to the ECB wading into the murky world of fiscal policy.

Despite this boost, markets are likely to be unnerved by his comments during the Q&A session. Draghi essentially ruled out any ECB or NCB lending to the IMF or at least suggested he would oppose the process. He also put pay to this ‘quid pro quo’ theory that the ECB will step in and increase its bond purchases if eurozone leaders agree some fiscal integration or discipline. We have to commend Draghi for his firmness on these issues, although we still fear he could wilt in the face of the increasing clamour from eurozone leaders and their reliable inability to find any solution. But at least for now it puts the ball firmly back into EU leaders’ court ahead of tomorrow’s summit.