Summiting the mountain that is the eurozone crisis 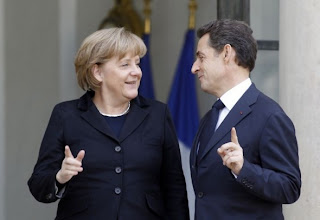 The perpetual rolling meetings which have characterised this eurozone crisis look to be reaching a head this week. The EU summit which kicks off on Thursday evening will undoubtedly be preceded by a series of smaller meetings between European officials and bilateral meetings with foreign leaders keen to see a solution to the crisis found (and in town to apply the suitable amount of public pressure).

Below we flag up a few key points of discussion to look out for, and outline some of the key issues which still need to be resolved:

– Today’s meeting between German Chancellor Angela Merkel and French President Nicolas Sarkozy must produce a united front on the plans for budgetary integration. If they fail to produce a set of concrete and workable proposals from the summit, planning will already be behind schedule and markets will begin to expect another failure. That said, given outstanding areas of disagreement (see here) some broad political agreement short on detail looks likely as always.

– The role of the ECB. Reports over the weekend suggested that the ECB was ready to step in once an agreement on strict fiscal discipline is reached. Whether or not eurozone leaders’ commitments will satisfy the ECB’s idea of austerity remains to be seen, and the unlimited backstop which markets want still looks unlikely. A plan involving the ECB lending to the IMF has been touted again.

– A greater role for the IMF. Germany agreed to explore the possibility of greater contributions to the IMF last week, although where these will come from is unclear. US opposition to expanding the IMF’s resources is significant (it requires congressional approval), but reports suggest financing could come from central banks in an attempt to circumvent political opposition.

– The UK’s approach to negotiations. Whether Prime Minister David Cameron will look to repatriate powers will depend on the details of any proposal Merkel and Sarkozy put forward, but it’s increasingly looking like he will keep his powder dry regarding his desired bigger push for retrieving powers from the EU. (For some of our recommendations see here and here).

– Italy unveiled a new set of controversial austerity measures yesterday, which look to have been well received so far. An important debate on the measures will take place in the Italian parliament today, while the reception which Italian Prime Minister Mario Monti gets at the summit will be a good gauge of what Italy can expect in the coming months. If the pressure is instantly for even more austerity, it could set the tone for a torrid few months for the interim Italian government.

– Other issues which still need to be ironed out include the leveraging of the EFSF, the eurozone bailout fund, and the second Greek bailout. Discussions over the extent of private sector involvement in the Greek package were put on hold last week – the package just looks too complex and will always be held up while it is voluntary. We would argue that the plan should be scrapped and a simpler, cleaner restructuring put in place for Greece, although that looks very unlikely.

All in all, plenty to keep an eye on.