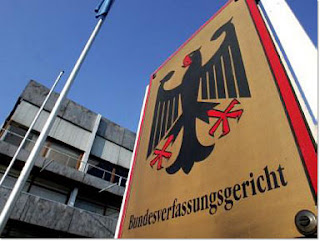 Given its scope in determining the application of Germany’s Constitution (Basic Law), the country’s Karlsruhe-based Constitutional Court (Bundesverfassungsgericht) has emerged as a vital, if low-key, player in the eurozone crisis. We have frequently covered its rulings in the past.

The Court has hit the headlines in Germany again as it is considering two appeals this week brought forward by German opposition politicians against the government’s handling of the eurozone crisis; the first involves the participation of the Bundestag in decisions concerning the deployment of the European Financial Stability Fund (EFSF), while the second involves a complaint made by the Green party over the perceived lack of information made available to MPs by the government regarding the European Stability Mechanism – the eurozone’s permanent bailout fund due to become operational in mid-2013.

Lets recap quickly: A so-called ‘special committee’ comprising nine MPs (meaning only five would be needed for a majority) was established last month in order to confidentially approve urgent and market-sensitive actions by the EFSF, possibly involving transactions running into billions of euros. This was a direct consequence of the Court’s earlier ruling that for the bailouts to be constitutional, the Bundestag must be involved in the decision making process. The MPs were to be selected from the 41 MPs sitting on the Bundestag’s Budgetary Committee, out of a grand total of 620 MPs.

Many were less than impressed by what they saw as an infringement of their rights as parliamentary representatives, and two SDP MPs, Peter Danckert and Sven Schulz, felt strongly enough to take the matter to the Constitutional Court, which displayed its not-inconsiderable powers by suspending the ‘special committee’ only days after it had been announced pending an investigation into its legality.

At yesterday’s hearing into the issue, Finance Minister Wolfgang Schäuble – who was forced to be there in person (quite rare) – defended the committee, arguing that:

“When markets react, they react excessively. Then there is panic. Without the observance of confidentiality, the EFSF rescue fund would, in certain areas, be incapacitated. Investors can hardly understand the intricate and complex processes of the European Union. We need an instrument capable of action whose decision making process can reasonably convince market participants.”

Peter Altmaier, Chief Whip of the CDU/CSU faction in the Bundestag, added that if the EFSF were to buy bonds from struggling member states on the secondary market, and these interventions were to become known at the wrong time, “then we would burn taxpayers’ money”.

However the Court’s judges were reportedly not entirely convinced, with President Andreas Voßkuhle warning that concentrating decision making powers in the hands of the ‘special committee’ could strip other MPs of their responsibility in this area, and that he had “certain doubts” over whether this could be right. Voßkuhle delivered this highly memorable quote:

“The constitutional rules of the game need to be maintained even in difficult times. The demand that ‘necessity knows no law’ has historically brought good fortune to man only in the short term, if at all.”

The Court now has some time to consider the case before delivering its final verdict – most likely to arrive in January. For all the power vested in the Court, and even in light of the concerns raised by the judges yesterday, it would nonetheless be unprecedented if it were to completely overrule the decision of a democratically elected government.

The Cout’s ruling is far from academic; as Dietmar Hipp writes in Der Spiegel:

Behind the scenes, much more is at stake: the loss of power of the Constitutional Court itself. The government and the court are locked in one of their biggest power struggles to date. One judge at the court described it as a “latent constitutional crisis.” The government, he said, was trying to free itself of the restraints imposed on it by the constitution, and by the court.

Hipp writes that efforts are already underway in Berlin to change the constitution so as to deprive the judges of their jurisdiction in questions of European integration. This is significant because Germany’s post-war political system was specifically designed to prevent the centralisation of power, with significant systemic circuit breakers such as the Constitutional Court put in place to counteract such a scenario. As a result important decisions in Germany have traditionally been reached slowly and by consensus, an approach that is not well suited to the sort of crisis management currently demanded by markets, the media and other politicians. As Voßkuhle has noted, this has placed the Court in a difficult position:

On the one hand, the Court had been credited for ensuring that European unity remained on a secure legal and democratic footing. But on the other hand, it is seen by some as an obstacle in overcoming the current crisis.

As we have argued repeatedly throughout the crisis, in spite of its international dimensions, national democracy is still king, and ultimately this how the fate of the euro will be determined. In Germany the ongoing struggle between the government, the parliament and the judiciary over how exactly democracy is to be exercised is likely to intensify.

In fact, this has become one of the most interesting faultlines of the crisis, one which does not only impact on politics and constitutional affairs in Germany, but the world economy at large.