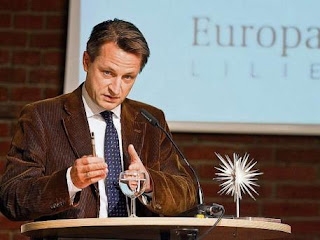 More news from Germany this morning. Over the weekend, Europe-Union Deutschland (EUD) – a German EU federalist pressure group which argues for more EU integration – handed out its yearly prizes: a ‘Europe Lily’ for outstanding achievements in European policy, and a corresponding ‘Europe Thistle’ for those, who in the view of EUD, are responsible for the biggest blunder in the same area. The event was well attended, with former EU Commissioner Günther Verheugen and senior CDU politican Peter Altmaier among the guests.

Incidentally it is worth briefly mentioning here that EUD has in the past received direct EU funding for some of its activities, so it is not exactly an impartial organisation.
Lilies were won by a German couple who have done much work for special schools and disabled children in Germany and Slovakia, two students who have helped develop youth centres in the Balkans, and Professor Beatrice Weder di Mauro from the University of Mainz.

Bild won some notoriety for its headline last years calling on Greece to sell its islands in order to pay off its budget deficit. At the event, Bild‘s reporting was criticised for being “too emotional”, and creating divisions amongst European citizens in its labelling of ‘good’ and ‘bad’ EU member states.

While similar awards (think Hollywood’s Razzies) are usually boycotted by embarrassed recipients, Bild‘s Deputy Editor Nikolaus Blome actually showed up to collect the award (pictured) and moreover, he took the opportunity to deliver a speech in which he defended the paper’s stance and argued that while he supported the euro, the current rescue package is deeply flawed. Blome also has a piece in today’s edition entitled: “Despite our joke-prize this is why we stand by our views”, in which he argues that Bild‘s coverage has been justified, pointing out that:

We said: “Sell your islands, you bankrupt Greeks”, and as promised this is what is happening; 70,000 state-owned properties are available for sale in Greece, including a complete peninsula and a small mountain.

Blome points out that where Bild has led others have followed. It has also set the parameters of the debate in the German media; it points out that its descriptions of Greece as a land where no-one pays their taxes, or its calls for Greece to be thrown out of the euro altogether were subsequently picked up by more ‘respectable’ publications such as Suddeutsche, FAZ and Der Spiegel. Furthermore Blome points out that the possibility of a Greek exit from the euro was recently acknowledged by Angela Merkel – 18 months after Bild first raised it. Blome concludes by saying:

“We are proud of this award…Would Greece really be in a better state if we had kept our mouths shut?…Beheading the messenger is a well established tradition, however this will not bring back the old order of the European elites… the word ‘thistle’ derives from the old Indo-Germanic language and means ‘spiky’ and ‘pungent’: That is what we want to be. Be glad that we exist!”

We doubt this is the last we hear from this paper…