Is a new "Ioannina" compromise the answer? 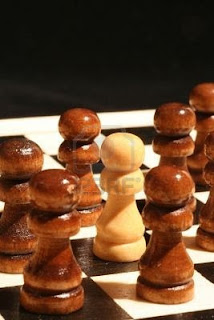 Today’s Telegraph quotes EU diplomatic sources saying that Britain is fighting France and Germany in order to resurrect the “Ioannina compromise.” This would not only have the effect of resurrecting an obscure piece of EU legal history, but it could also be an encouraging sign that the UK government is starting to think creatively about how to protect itself against potentially shifting power dynamics in the EU, should a more integrated eurozone bloc start to vote as a caucus.

So what could a new EU voting”compromise” look like?
By way of background – the
In our recent report we explained that in 2014 (or possibly 2017) new voting rules buried within the Lisbon Treaty will come into force, which will result a permanent majority for the eurozone block on the Council, meaning they could outvote non-members even if they all combined in order to block the law.

Clearly, this is a pretty big gamble for non-eurozone countries to take. So could Cameron seek to to resurrect the old Ioannina compromise?

It’s not a bad idea but does come with two drawbacks:

Problem 1: Under the current rules (as shown below) the eurozone are already close to having a majority. These rules expire in 2014/17 when the new Lisbon Treaty rules come in giving the eurozone a permenant majority. If the concession the UK is potentially requesting is to allow the current rules to continue permenantly (even after 2017) if requested – it would not make it any easier than at present to form a blocking minority and so would not decisivly deal with the problem of eurozone caucusing.

Problem 2: But the Ioannina compromise was never legally binding (it was a political declaration) meaning that there is no guarantee that it’ll actually be invoked (also making the threat of it less effective). Given the unhappy EU history of political declarations, this may not be a watertight solution – far from it. For the UK this problem is compounded by the fact that of the 10 states not in the euro most are legally obliged or even want to join. So the compromise will need to be set at a higher level, so that those states that are not obliged to join (Denmark and the UK) can have some sort of way to block proposals that stem from caucusing.

The idea of a new voting safeguard is certainly worth exploring but the UK government must set the bar higher than a mere political declaration. Spending a lot of political capital on something that won’t be effective would be the worst of both worlds. 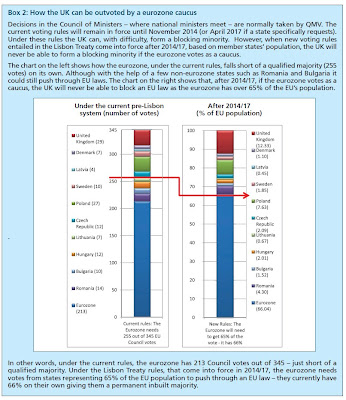