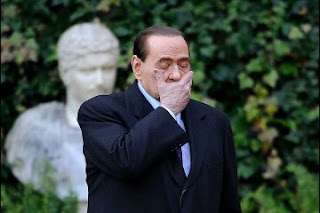 Things have gotten very bad, very quickly for Italy this morning. Italy’s 10 year borrowing costs opened at 6.8%, already very high but many expected some quick ECB bond buying to help bring it down substantially. However, with the ECB nowhere in sight the yield has shot up to 7.45% at pixel time. It’s not clear exactly why this has happened, with markets looking slightly confused as to how to respond to the events in Italy last night.

Berlusconi said that he will resign once the economic reforms, which he promised to EU leaders, were put in place. Talk of his resignation has previously lifted markets, however, given the tentative nature and uncertainty surrounding yesterday’s announcement markets are not certain on how to take it (equities have responded well, while bond markets are all over the place).

Across the board (for all maturities) the borrowing costs for Italian debt have been increasing, but importantly the rates for shorter term debt have now overtaken those on longer term debt (aka. the yield curve has become inverted). This is worrying as it signifies that investors are seeing an increasing default risk in the short term resulting from huge levels of uncertainty. This phenomenon was seen in Greece, Ireland and Portugal before they requested bailouts and is often a sign of the situation approaching a self-fulfilling spiral, where borrowing costs skyrocket into unsustainable territory.

In purely technical terms the costs are not quite unsustainable yet. Italy has a large amount of debt to rollover in the coming months and years, but it could stomach these rates for a few months if they were to come down eventually. Ominously however, Greece and Ireland lasted 13 and 15 days respectively, with 10yr rates above 7% before asking for a bailout and while Portugal managed to drag it out to 49 days – once the 7% threshold is breached it is rare for a country to drop below it again without outside intervention.

The best thing to do now would be for Berlusconi to go as soon as possible, once a plan for a unity government to take over from him is in place. These negotiations need to happen quickly, with a clear timeline and plan of action for the new government outlined publicly. The market is yearning for some certainty in this situation, Italy and eurozone leaders must step in to offer some.