The EU summit – our take 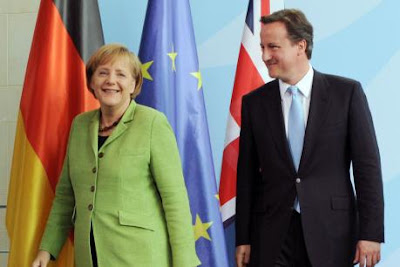 So the eurozone crisis talks go on, but for those of you interested, the conclusions from this week’s EU summit can be found here. There were no surprise statements as most decisions were deferred to the extra meeting on Wednesday, though most EU leaders did their best to give assurances at their respective press conferences that they’re making “good progress”. A few points:

– It was agreed that a full European Council meeting will precede Wednesday’s eurozone meeting – a concession to the UK, Poland, Sweden and other ‘outs’.
– How to leverage EFSF still needs to be resolved, with two options reportedly under discussion – none of them, thankfully, involving the ECB (according to Merkel).
– No agreement on what to do with Greece.
– EU leaders seem to have reached a preliminary agreement on bank recapitalisation, with most reports stating that leaders see a need for a €100bn capital injection (add or take away a few billions) into the EU’s banking sector, first coming from private funding, then governments and finally EFSF as a last resort.
– Viewed from London, it’s interesting that that draft conclusions state that any EU treaty change must be agreed by all 27 member states. This is of course the case per definition for an EU Treaty change but could also be an attempt by the UK and others to steer the eurozone away from pursuing a eurozone-only Treaty (similar to Schengen), effectively stripping the UK and other non euro-members of their veto over changes that could have an indirect, but significant, impact on them.
At his press conference, David Cameron also said that any EU Treaty change could be used to “advance British interests”, which is interesting. Cameron is probably playing to sceptics at home ahead of tomorrow’s vote in the Commons on a motion calling for an in/out referendum. But by upping the game like this, it will be difficult for him not to deliver some sort of safeguard or even powers back when EU Treaty changes or further eurozone integration are put on the table (a first discussion over Treaty change can be initatied as early as December). That pressure will be there even if that change technically impacts on the eurozone only.
As we’ve argued before, the eurozone crisis is changing the way Europe operates, which has all kinds of implications, for example steering the EU in a more “inter-governmental” direction. The implication for the UK’s Coalition government is clear, however: Cameron and Clegg simply can’t freeze the EU as an issue during this parliament, as was its original strategy. The status quo is no longer an option, whether they like it or not.
Now, at his press conference, Cameron flagged up the risk of an integrated eurozone effectively taking bloc-decisions with a profound impact on the UK economy, but without the UK having a presence at the negotiation table, for example in trade and financial services. He’s absolutely correct to highlight this potential risk.
But he is wrong to say, as he also did at the press conference, that we shouldn’t ‘get ahead of ourselves’ on a potential EU treaty change, as such changes “take years”. It’s true that Treaty changes will be slow-moving, but the key to set the agenda in EU negotiations is to get in early and get in with clear objectives, meaning that now is the exact right time for the Coalition to develop a game plan for how to achieve reform in Europe. Not through grand posturing or meaningless symbolic demands, but a concrete, credible and positive blueprint, forming a part of the constitutional and political settlement that is likely follow in the wake of the eurozone crisis, whatever turn that crisis takes. And just for the record, there’s a crucial difference between the immediate crisis, which is wholly inappropriate to seeking to exploit and the long, political discussion that will follow afterwards, where the UK has little choice but to engage with its own sets of demands (like everyone else).
Following tomorrow’s vote in UK parliament on an in/out referendum, this is where the debate on EU reform probably needs to move on to.