Meanwhile, out there in space… 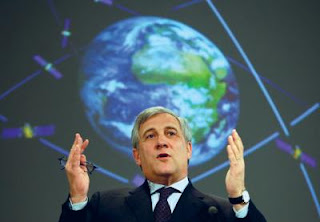 We have already reported on the EU’s ill-fated attempt to conquer the final frontier a number of times. But the big day has finally arrived.

Three years after the original planned launch date of the European satellite navigation system Galileo, the first two operational satellites will be launched into orbit aboard a Russian Soyuz rocket.

Galileo, intended to break the hegemony of the US GPS system, is glowingly praised in yesterday’s Handelsblatt for its ability to provide positional data with up to one meter precision, instead of the ten meter precision provided by the GPS system (to the public).

The European Space Agency (ESA) is quoted claiming that possible uses for Galileo range from investigators using positioning data in manhunts to civil engineers using it in order to size-up future buildings. Furthermore, they claim that flights will be more punctual and reliable due to having more precise approach paths to airports, so it will even contribute to fuel savings.

Sounds great, is there anything Galileo can’t do, you ask?

– Be operational on schedule. This will require 18 out of the total 30 satellites to be in orbit, something which Handelsblatt notes will take until 2014, six years after the original planned start date. Considering GPS became operational in 1994, and both Russia and China have their own navigation systems, Europe clearly has fallen far behind.

– Avoid continuous cost overruns. As we noted in a report on Galileo last year, we said that the EU Commission was under-estimating the deployment cost of the project and would in fact need an extra €1.5 billion to €1.7 billion, on top of the existing €3.4 billion estimate. The Commission later confirmed that the actual cost overrun would be an extra €1.9bn for deployment. The annual operational costs have also risen from the original Commission estimates.

Despite this sorry history, earlier this year, EU Industry Commissioner Antonio Tajani (pictured) had the temerity to claim that ‘savings’ (some €300-500m) had been identified in order to bring an additional 6 satellites into operation by 2014. In the face of such huge cost overruns, amounting to billions, describing this as a ‘saving’ in the overall context of the project strikes us as slightly disingenuous, to put it mildly.

– Attract private investors. Originally the intent was for private investors to fund approximately 66% of the cost of construction and the first 20 years of operations, however, partly due to lack of commercial prospects (other competing systems) private investors pulled out, and taxpayers have been asked to fund the project for the last decade.

–Generate profits. The ESA still maintains that “Galileo is facing a market with huge opportunities for growth in the next few years.” A German government report from 2010 paints a gloomier picture however, saying “All in all, it is assumed, based on the currently available estimates, that the operating costs will exceed direct revenues, even in the long term.”

But fear not, Galileo has, however, provided Commissioner Tajani and some selected journalists with a reason to charter a plane to fly to French Guiana and back in order to witness the launch first hand, Europaportalen reports.

Update 12:30pm Reuters reports that due to technical problems, specifically an anomaly detected during the fueling of the Soyuz launcher, the launch has been postponed until tomorrow. Given Galileo’s track record so far, this really doesn’t come as a huge surprise…