Hague can’t ignore prospect of treaty change for much longer 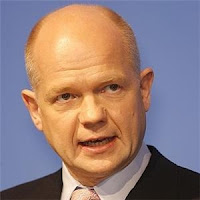 Speaking on Andrew Marr‘s show yesterday, William Hague repeated his view that there is no “immediate prospect” of repatriating powers from Brussels. “The repatriation of powers, which is something I support by the way, is not an immediate prospect because no countries are proposing widespread treaty change,” he said.

“That may change, but at the moment, that is not what they are proposing…”

But as we’ve said before, this is all moving much faster than the UK Government is letting on or perhaps would like. Contrast Hague with German Foreign Minister Guido Westerwelle’s rather more urgent tone in an interview with the FT last week. He said that Berlin wants to persuade other members of the EU to draft changes to the bloc’s founding treaties at a new 27-nation convention (or IGC) that would take place in 2012.

The Convention should be given a clear mandate and a one-year time limit to deliver results by mid-2013, when the eurozone’s permanent €500bn rescue fund – the European Stability Mechanism – is supposed to come into effect, he said. “We need treaty changes to overcome the shortcomings of (European) construction.”

He added that the Convention should consider whether the European Court of Justice would be used to enforce budgetary discipline, and if a “stability commissioner” for the euro should be appointed, suggesting “Probably both are necessary.”

These are clearly “widespread treaty changes” that Hague seems to suggest are far off on the horizon but 2012 is less than two months away. Yes, the actual process of negotiating Treaty changes takes years. But, which the UK govenrment should know from experience, getting in early and getting with a clear agenda, is absolutely vital if a country wants to influence the outcome.

It’s time the Government picked up the pace.