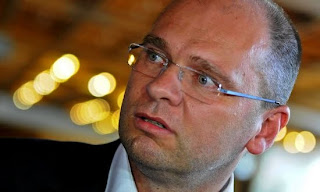 Yesterday’s Handelsblatt featured a story on how an “Eastern European Tea Party” is brewing, as Slovakia’s Freedom and Solidarity (SaS) party is sticking to its guns and continues to oppose the expansion of the EFSF, the eurozone’s temporary bailout fund (we would hasten to add that Slovaks would probably feel more comfortable with being described as ‘Central Europeans’).

Over recent days, eurozone leaders have grown increasingly nervous as they brace themselves for the vote in the Slovak Parliament on the expansion of the fund (expected later today, unless something changes). That Slovakia’s PM yesterday threatened to quit over the issue hasn’t exactly lowered the stakes either.

The SaS party has 21 out of 150 MPs and its leader, Richard Sulik (see picture) is the Speaker of the Slovak Parliament, and with the help of the opposition, the party could block the approval of the boosted EFSF. In return for approving the changes to the EFSF, the party has demanded that Slovakia doesn’t contribute to the the European Stability Mechanism (ESM), the eurozone’s permanent bailout scheme, set to supercede the EFSF in 2013. The article notes that Sulik’s MPs are united in their opposition to the EFSF, in contrast to German FDP, for example, which remains split on the issue (incidentally, leading German euro rebel, FDP MP Frank Schaeffler, and Sulik made common cause last week).

Sulik is quoted in the article saying:

“for me the most important thing is to protect Slovak taxpayers’
money. Relative to our economic strenght, we contribute the largest share
towards the bailout scheme. That’s not acceptable.”

The newspaper compares the Slovak anti-bailout movement to the Tea Party activists in the U.S. We’ll see if SaS gives in later today, but one thing is for sure: as the eurozone crisis unfold, this is unlikely to be the last time we witness parliamentary opposition to ongoing bailouts.

***Update 10.00am: SME Online reports that the vote in the Slovak Parliament could be postponed, given that the EU summit to be held this month has been delayed, and is now scheduled for 23rd October (a Sunday incidentally).

***Update 11.00am: Sulik has said that SaS will abstain, while the opposition continues to insist that it will not vote for the EFSF changes unless there’s early elections. So the choice for Slovakian PM Iveta Radičová basically comes down to passing the EFSF or saving her coalition government. If the government falls, there will be a majority in Parliament for the EFSF, as the opposition will most likely support the changes to the fund following the dissolution of the government, and will pass it with the help of KU (Radicova’s party) – though the date or mechanics of such a vote remain unclear.