Europe at the Tory conference: much ado about nothing 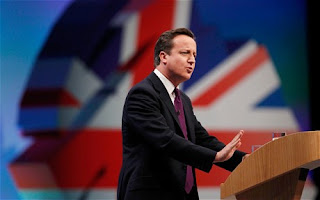 The blog has been a bit quiet for a few days because the Open Europe team have been busy in Manchester at the Tory party conference. However, normal service will now resume.

In the days leading up to the conference, “Europe” was predicted to be one of the major issues on the agenda, which it was. Preceding and during the conference, Cameron and Hague both publicly supported a renegotiation of powers from Brussels but stressed this was something that was either “for the longer term” or “many years” away. Both rejected calls for an EU referendum – something which Boris Johnson said was “not a bad idea”. But this is the closest that the papers got to a ‘Tory split over Europe’ story.

To be honest, the entire conference was a bit flat, and for all the talk about Europe leading up to it, and the whole host of fringe meetings on the topic, nothing particularly new or exciting was actually said.

Over on ConHome, Bruce Anderson argues that, “The heat has gone out of the Europe debate. Everyone knows that the EU is in retreat; no-one is afraid of a renewed federalist onslaught.” This is partly true, but it’s equally true that many Conservatives probably find it difficult to grasp where, exactly, Europe is at – which isn’t surprising, given that Europe (if that ever was a coherent political entity) itself has no idea where it is at, or is heading.

In addition, despite what some have argued, there’s a growing realisation that the eurozone crisis is seriously scary, and at worst, threatens to send the UK economy straight back to recession. Conservative MPs and activists realise (though not without exception) that there’s a difference between the immediate economic crisis – which is about contingency planning, buffering up banks and preparing the economy for potential sovereign defaults – and the long-grinding political and constitutional settlement that will follow the crisis (should it ever end).

The usual calls for an in/out referendum aside, Europe therefore never really kicked off as an issue at the conference. But nonetheless, for the Conservative party leadership, now is the time to be thinking strategically for the future, as important tactical battles most certainly remain on the horizon.

Speaking at one of our fringe events, Dr Kay Swinburne MEP warned of the climate of “hostility” towards the UK in Brussels, arguing that the Government should focus its efforts on increasing the number of British civil servants in the Commission. She also suggested that the Government should have “killed off” plans for an EU-wide financial transactions tax earlier, noting that EU Tax Commissioner Algirdas Semeta had “already started work” on presenting the FTT as a valued added tax (VAT) – which could be imposed without a unanimous vote and therefore strip Britain of its right to veto.

The party leadership’s hopes that any major decision on Europe can be delayed depends on events in the eurozone, which continues to edge closer to a tipping point (though eurozone leaders seem to have made a common sense move, by focussing on the recapitalisation of banks). While Tories made EU small talk in Manchester, France and Belgium were forced to bail out another bank in the shape of Dexia (due to fears over its exposure to Greece) and Italy was downgraded.

Last night, only hours after Hague said to the BBC, “Don’t run away with expectations that there is about to be some major treaty change, these things take years to negotiate and then to ratify in other countries,” President Jose Manuel Barroso was telling gathered reporters that, “We may need treaty change for more integration if current (financial) mechanisms are proved not to be enough.” Alongside him, Chancellor Merkel added, “we shouldn’t rule out the possibility of treaty change.”

Yes, EU treaty changes are slow-moving things, but if they are to have any chance of setting at least parts of the agenda, Messrs Cameron, Osborne and Hague may have a lot less time than they hope.