Forget about the crisis: The EU wants to put a man on the moon (well, at least a robot) 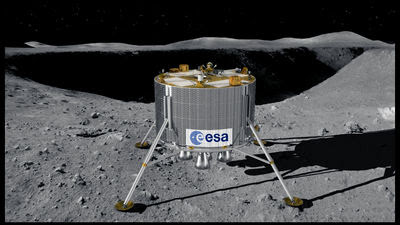 We’ll resist the rather too obvious “EU officials are on another planet” jokes.

You might think that all available resources are going into saving the EU countries that stand on the verge of financial collapse. Well, there’s always some cash left for vanity projects. Handelsblatt reported yesterday on a fairly unknown EU project aimed at getting to the moon by 2018.

Last year, the European Space Agency (ESA) awarded Astrium a contract worth €6.5 million, largely financed by Germany, to investigate the possibility of a landing at the Moon’s south pole.

The ESA quite clearly sees itself as representing “Europe” in this endeavour. This is ESA Director for “Human Spaceflight” Simonetta Di Pippo, who may well have watched the movie 2001: A Space Odyssey a few too many times:

“The Moon is the next natural goal on our common path to destinations further afield. Europe is actively and successfully present in these global projects, like ISS and exploration, which contribute to affirm our role as a modern, dynamic and innovation-driven continent.”

At least initially, it appears, we’re looking at an unmanned mission to the moon, as Europe doesn’t have “the technological capacity yet” to send living, breathing people, according to Michael Menking of Astrium. As Handelsblatt notes, the first European on the moon will therefore be a robot (will Herman Van Rompuy do?).

EADS (the European Aeronautic Defence and Space Company) is now conducting a “Lunar Lander Phase B1 study” whose “final result…will be a fully defined mission concept and a detailed design of the landing vehicle and Moon rover.” The rover is tasked with exploring the surface, while stationary instruments will record experimental data for an expected six to eight months. Just in case the Americans and Russians missed something…

The “Phase B1 study”, when completed, will lay out in a “Preliminary Systems Requirements Preview” an overall cost and a schedule so that a decision on full financing of the mission can be made at the next ESA Council Meeting, during the first half of 2012.

Following the decision, the ESA’s next step is to issue contracts for the development, construction and testing of the Lunar Lander. In other words, member states could soon see some pretty hefty space bills landing in their in-trays. Let’s hope that this project doesn’t face the same constant delays and cost over-runs, which have haunted that other great European space project, Galileo.

What about an actual EU man on the moon? When asked about it by Handelsblatt, ESA Director of Human Spaceflight, Thomas Reiter, answered optimistically “a return to the moon is an obvious target.” Hans Jörg Dittus, Executive Board member at the German Aerospace Center, is, however, less certain. “At the moment we don’t have the money in Europe” for manned spaceflight, he said.

Is this a worthwhile project that European taxpayers actually want to support? We have no idea – it could be. Maybe its a cunning plan dreamt up by certain EU leaders who would be quite keen on getting themselves on that shuttle if things go really sour…