Hague hits back on the Euro 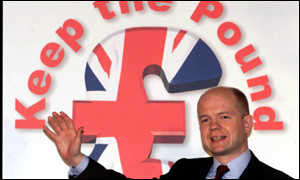 The Spectator’s James Forsyth has conducted an extended interview with Foreign Secretary, William Hague, which contains a lot of interesting points, not least about the ongoing Eurozone crisis, the future direction of the EU, coalition politics on Europe and finally his future job prospects…

The central theme of the section of the interview relevant to Europe is one of vindication, in particular regarding Hague’s campaign to keep Britain out the Euro when he was party leader, even if this was widely mocked at the time. Hague does not mince his words, describing the euro as:

Hague clearly thinks that many of the current problems stem from the fact that the rules were fudged to allow the struggling countries to become members in the first place. Nonetheless, to his credit, he does not indulge in gloating or triumphalism but is quick to acknowledge that the eurozone’s troubles also threaten Britain’s national interest, and Britain should not hope for the break-up of the single currency, saying:

“We are very concerned about what would happen if the euro broke up and so despite all our opposition to it… we must support [the Eurozone]”.

Significantly, his “no exits” line means he does not advocate a default by any of the struggling economies, arguing instead that the Greeks, Portuguese and possibly even Italians “will have to accept some very big changes in what happens in their country” (which indicates having to adopt further austerity measures), while crucially, he says that the Germans will “have to accept that they are going to subsidise those countries for a long time to come really, for the rest of their lifetimes.” This is clearly not going to be acceptable to the Germans, as proved by their refusal to countenance expanding the EFSF even further, for example by allowing it to be leveraged through the ECB.

Worryingly, however, Hague does not elaborate on what would happen if these conditions were unable to be met, and says that if the Eurozone countries are unable to meet a six week deadline set by George Osborne to push through measures already agreed to try and protect the Euro, “then we’ll be even more worried”, which even if honest, hardly inspires confidence.

Away from the apocalyptic narrative surrounding the Eurozone, Hague indicated that in terms of broader UK-EU relations, he still believes that:

However he refuses to be drawn on what he is going to do about this, giving a rather vague answer that it would have to be discussed within the coalition. James Forsyth concludes that “Hague seems to see bringing back powers as very much a second term issue”, reinforced by Hague’s assertion that Europe could be one of the dividing lines between the coalition parties put forward at the next election. Here we would argue that there is no excuse for inaction on repatriating powers and EU reform, and the Government must try to build a consensus on this issue, even if this means Conservative and Liberal Democrat backbenchers having to make some compromises on their respective Eurosceptic/Europhile beliefs.

Finally on a lighter note, at the end of the interview, Hague insisted that whatever he may turn to in the future, replacing Cathy Ashton as the European Union’s external affairs commissioner is most definitely not on his agenda, insisting that “any job I have in the future will not be in the European Union”.