The statement that said nothing – and yet meant everything 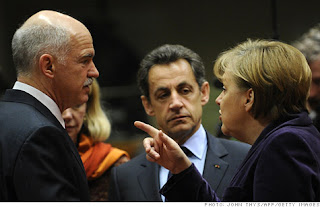 Last night, German Chancellor Angela Merkel, French President Nicolas Sarkozy and Greek PM George Papandreou held another one of those crunch-time talks, as the fate of the euro balanced on a knife’s edge. Amid reports that Greece is falling well short of meeting its austerity targets, markets feared an imminent Greek default, with the risk that the country would have to leave the eurozone altogether. Following IMF/ECB/EU pressure last week, Greek PM Papandreou announced new austerity measures, including a property tax and further cuts in public sector jobs.

But the jitters remained. As ever, it’s one thing to announce new measures, a completely different thing to implement them in a way that actually results in savings – and even with these new cuts, Greece’s situation looks rather hopeless, and a default inevitable.

So what to make of yesterday’s statement by Sakrozy and Merkel? Well, this was the thrust of it:

The Chancellor and the President are convinced that the future of Greece is in the eurozone. The implementation bailout deal obligations is essential for the Greek economy to return to sustainable and balanced growth. The Greek Prime Minister has confirmed the absolute commitment of his government to take all necessary measures to implement the obligations in their entirety. Greece’s successful adoption of the measures will strengthen the stability of the eurozone.

Absolutely nothing new in there. But as we argued yesterday on Newsnight, there appears to be an implicit guarantee that, even though Greece is falling short of its commitments in reality and will be unable to reduce its debt mountain by its own strength alone, Germany and France will stand behind the country – at least for now. The charade over impossible austerity targets will continue – to appease increasingly restless parliaments in Triple A countries – but Greece will receive the next tranche of EU/IMF money, worth some €8bn (needed for it to avoid immediate bankruptcy).

The statement may also be a nod in the direction of the IMF, whose officials remain unconvinced. It’ll now be very difficult for the IMF to refuse to unlock the next tranche of aid to Greece, following EU/ECB/IMF evaluations that will resume next week. Olli Rehn today also effectively confirmed that Greece will receive the next tranche.

Behind the scenes, meanwhile, finance ministries continue to scramble for some sort of ‘solution’ to the Greek problem, with an orderly default sailing up the wish list as one of the few realistic alternatives. As ever, buying time is the only strategy. Very uncomfortable questions about Greece’s future inside the eurozone remain.